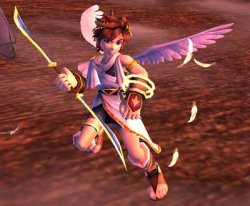 Nintendo’s E3 press conference had some highlights. Overall, however, Nintendo presented a very limited number of “hardcore” games. There was no new Zelda title, barely any mention of Mario, and even the upcoming Wario Land was absent. Reggie Fils-Aime on the other hand, strongly believes that Nintendo has enough games at this year’s E3 to support the core gamer. In a brief interview on G4 following Nintendo’s media briefing, Fils-Aime explained, “How could you feel left out? The Animal Crossing that we’ve been hearing about that people wanted. Fully connected to the Internet, go to other people’s towns. Plus as I said, Grand Theft Auto on the DS. How do you feel left out with those types of announcements?”

Fils-Aime also commented about Kid Icarus for Wii, but essentially dodged the subject: “You know, we never said he was coming. We’ve all seen the rumors and all of what we see as the desires that consumers want. Make no mistake, Mr. Iwata said quite clearly: Mario teams, Zelda teams are working, they’re bringing product out for Wii this generation. We’re going to continue to bring all our best franchises to both of our key platforms and continue driving that experience both core as well as brand new consumers.”