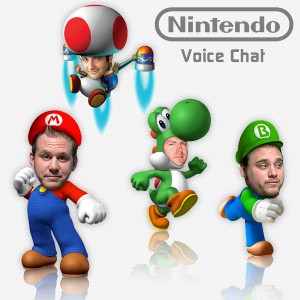 Wii Sports Resort
– All 3 minigames were pretty fun
– Matt liked the disc dog game, since you can see how accurate Wii Motion Plus is – worked perfectly
– Angle, rotation played a huge part where the disc would land
– Craig thought sword-fighting was really accurate as well

WiiSpeak
– Laughably made
– Can put it anywhere in the room, cord looks gigantic (based on photos)
– Made for 3 – 4 people playing on a couch
– A third-party might make a work-around eventually (headset, microphone)
– Can use wireless keyboard in AC: City Folk
– Matt will remain skeptical until he can really test it
– Nintendo playing it safe again – Craig

Animal Crossing: City Folk
– It’s a polished DS game
– GameCube graphics, maybe even DS graphics
– Eguchi was surprised when he was told the graphics look like GCN/DS
– Scrolling world
– No gestures for chopping down trees or anything
– Could have been Wii’s version of home – Matt was looking forward to a deeper experience
– City looks gimped – only about four stores
– Craig wonders what is new with the game
– Could end up being a great game, but not much different

Guitar Hero On Tour Decades
– Stream new songs to the old game
– Cool technology, especially since this is on the DS

1st party games
– Nintendo made previous announcements about DS games
– Announced Rhythm Heaven, but not at the conference – was on the press site
– Showed Wario Land behind closed doors, is a fun game

The Conduit
– Game of the show
– Looks really good, controls are great
– A little framey, but High Voltage promises it will be perfect
– Control options are very detailed
– Weapons inventive, use Wiimote well
– Real-time FPS control scheme (can change controls on the fly)
– At first, when Craig saw the game, he didn’t know that The Conduit was a Wii game

– de Blob was a big surprise for Matt – the game is polished, really coming together, some great visual effects

– Cammie Dunaway is technically replacing Reggie, Denise Kaigler replacing Perrin
– Cammie doesn’t write her own speeches, so Matt says we shouldn’t blame her for E3 performance – Give her some slack
– Craig says she is very nice, the snowboarding story is true
– The one writing Cammie’s speech (and Cammie herself for comments on HDD, etc) needed to realize the audience it was being presented to
– There is clearly a storage solution for Wii, but someone needs to come right out and say it

– E3 show was a misstep because Nintendo totally ignored hardcore – Matt
– Iwata apologized for the show
– Matt thinks at Nintendo’s next event, there will be a lot of hardcore games because of their E3 showing
– Craig loved Spaceworld, Matt thinks they should start campaigning for it to return for Nintendo
– E3 was a “we don’t care event” for companies – no energy, places vacant

Trackmania
– PC arcadey racing game
– Ideas from PC version make a good transition to DS
– Create own tracks
– Track can be edited in the track editor itself
– Race engine is smooth, but some framerate issues
– Fun, bouncy racing

– Fatal Frame in the IGN office Friday, should come to the US at some point

Reader questions
– Nintendo might show off some hardcore games at TGS or maybe a new Spaceworld
– Nintendo understands the core, but Craig thinks marketing department is out of touch with core audience – Iwata makes final decisions for what to show at conference
– Matt thought Kid Icarus would be at E3 – “What is true one day is not true the next and we don’t really make the news, we tell you what we hear”
– Matt would recommend Wario Land to anyone, Matt used to think it would be a quick cash-in game (but not anymore)
– We have to see if there is more to City Folk than the bug catching, fishing, etc. – apparently more to the online mode then Nintendo showed
– Matt thinks there could be more that will be announced before the end of the year (Fatal Frame, other things Nintendo could potentially publish from third-parties)
– Matt thinks Nintendo will eventually pack Wii MotionPlus with the Wii controllers in the future
– When will Cammie be fired? Not anytime soon – Only 1 show, Matt thinks we should give her a break
– Matt + Craig loved The Dark Knight
– Castlevania: Order of Ecclesia uses the same engine as previous two DS titles
– Matt wants to review Wii Music so he can blast it (Matt hopes the game will have something redeeming when it ships)
– Is Nintendo holding back own lineup for third-parties? Matt doesn’t thinks so, no rush for them to flood market with their own software
– Matt + Craig won’t be sad if E3 doesn’t come back next year
– No word on Disaster: Day of Crisis, Matt fears the future for the game – might be heading down Project H.A.M.M.E.R’s path
– FFCC: The Crystal Bearers – still in development, Square Enix had nothing to show
– NOA not knowing about Fatal Frame 4 – The people being questioned were probably the executives, won’t know about it until there is a press release/are coached about it
– Mad World was eyes-on – looked cool + fun but the style is a weird mashup
– Game of the show for any console: Matt – Mirror’s Edge or Dead Space, Craig – Fallout 3
– Nintendo won’t make a switch to disc-based format in future handhelds because of loadtimes and battery power
– Nintendo hasn’t released their own game for the VC in over 3 months – Matt thinks maybe Nintendo is trying to address all third-party games in their queue
– Favorite instrument in Wii Music – Matt: “The power-off button”
– Nintendo didn’t show much for the DS at all – Craig thinks that Nintendo could at least make a New Super Mario Bros. 2 on the same engine
– There was no DS redesign because of booming DSL sales