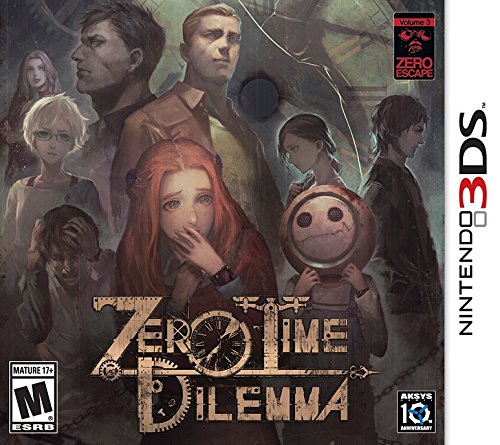 This week’s Famitsu has an four page feature on Zero Time Dilemma. The magazine recaps some previously-known information while also sharing extra tidbits.

Zero Time Dilemma is labeled as a “Dicision Game” (that is indeed the actual spelling). Each of the three teams are placed somewhere inside the underground nuclear shelter. Everyone is equipped with a timer bracelet on their left wrist, and the teams are given 90 minutes to find a way to escape the shelter. However, once the 90 minutes are up, the bracelet will administer drugs that cause them to fall asleep and lose all memories of what happened during that time.

Gameplay-wise, the player goes through these 90-minute loops to collect Story Fragments (SF) that will lead towards the truth of the whole incident happening in the game. But the order of obtaining these could have differences from the actual timeline. For example, the player collects SF 1 and SF 2 in order. There are possibilities that the following could happen:

1. The order is actually reversed (SF2 first then SF1)
2. There is another SF actually happening between the two (a yet unobtained SF3 is in between SF1 and SF2)
3. They are actually parts of different branches from each other (ex: the story branches between SF1>SF3 or SF4>SF2)

Other information in Famisu includes:

– Quest Part: This is the main feature of the game. The teams will explore rooms and facilities inside the shelter, and solve mysteries that have been set for them. The aim is to solve the gimmicks using memos and items found while exploring, from solving passwords to combining items (ex: screwdriver parts), or activating a robot that walks to trigger a countdown bomb, prompting the player to defuse the bomb.

If the player ever gets stuck in solving the puzzles, the other team members will be giving advice on how to solve them.

– Dicision Part (sic): At certain points, players are forced to choose between two options that can drastically alter the story. The choices could range from simply choosing between the two provided paths, or whether to press a button or not within a given time limit.

– About Team Q: Team Q is comprised of entirely brand-new characters: Eric and Mila, a couple in a relationship; with Q, an amnesiac boy. Even when Q is designated as the team’s leader, his childish mentality gets exposed at times. Eric fully trusts Mila, but looks down upon Q because he looks suspicious and treats him like a criminal. Mila, who considers herself as insensitive, tries to cunningly balance the team by controlling Eric while trying to be friendly with Q.