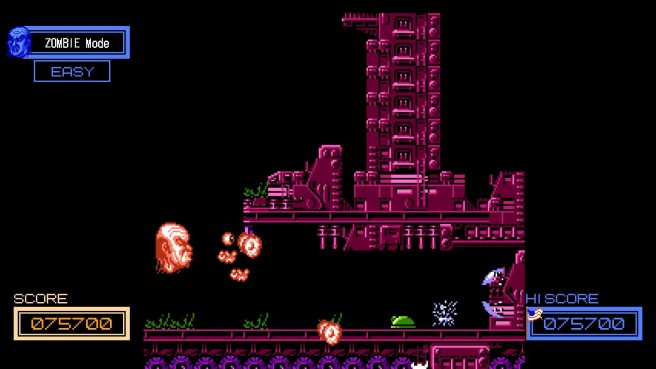 City Connection has unveiled a new trailer for Abarenbo Tengu & Zombie Nation ahead of its arrival on Switch later this month. Check out the video and some more information on the title below.

In case you missed it, here’s an overview for Abarenbo Tengu & Zombie Nation:

This revival is a dual set of Abarenbo Tengu, a game that was released in 1990 on the Famicom System and Zombie Nation, which was released in the following year. Save the world and fight to maintain the peace in this exciting side-scrolling shooter, now with new modes and functions.

In the year 199X, just before the 21st century, an unidentified evil star is approaching the United States. As it approached the mainland, it transformed itself into an evil life form that was about to cover all of the country. The life form (Darc Seed) emitted a specter that turned everyone into a wraith. The few people who still had their soul were captured. The people’s prayers crossed the sea and reached the Tengu of Yamato, the guardian god of peace. Using his own spiritual power, he created a ‘mask of the Great Tengu’ and flew it to the U.S. mainland to regain freedom and peace. What awaits is a completely uncontrollable army and monsters that have been created by the energy of Darc Seed. Will the ‘Great Tengu’ be able to save the United States from this mayhem in time?

1999. What appeared to be a harmless meteorite crashing in the Nevada desert had turned out to be Darc Seed, an evil alien creature with horrible powers. By shooting strange magnetic rays, Darc Seed had turned the helpless nation into zombies and had brought the Statue of Liberty to life to do his dirty work. These rays had also given him control over many deadly weapons, but none were more powerful than the legendary samurai sword, Shura. When the great head of the samurai, Namakubi, heard that the sword had fallen into evil hands, he set off immediately for the United States. For only he possessed the strength and knowledge needed to recapture the magical sword and free the U.S. from the evil clutches of Darc Seed.

Select either Abarenbo Tengu or Zombie Nation from the title screen.

* Default will be set with PETENGU and ZOMBIE Mode

PETENGU Mode / ZOMBIE Mode
In this mode, you can play with useful functions such as Rewind, Quick Save, and Quick Load. Clearing all rounds unlocks the Special mode.

EXCITENGU Mode / SAMURAI Mode
This is a mode that allows you to play in the same way as the original. Although you can only use Accessories for useful features, you can challenge for achievements. You can test the results of your practice in PETENGU Mode and ZOMBIE Mode, clear all rounds, and unlock achievements.

* This mode cannot the used in the Special mode.

New feature 1: Rewind: You can save and load at any part of the game. Abarembo Tengu and Zombie Nation each have 3 save slots.

New feature 2: Quick save and load: You can save and load at any part of the game. Abarembo Tengu and Zombie Nation each have 3 save slots.

New feature 3:Rapid Fire: You can set ON/OFF of the Rapid-Fire function in Abarembo Tengu in the options screen. ※ Zombie Nation included this function in the original game.

New feature 4:Accessories: You can show the mode, difficulty（EASY / HARD), scores and also high scores on the screen. In the EXCITENGU and SAMURAI modes, you can check your achievements as well.

* You can view the manual for each game through the menu.

Achievement: You can view achievements from the title screen. You can see achievements you can challenge in the EXCITENGU and SAMURAI modes. By using the Accessory function, you can check what you have obtained during gameplay.

Special: Special unlocks when you clear all rounds in the PETENGU or ZOMBIE modes and you will be able to select it from the menu for each game. You’ll be able to play ‘that mode’ where you can play with the hidden command.