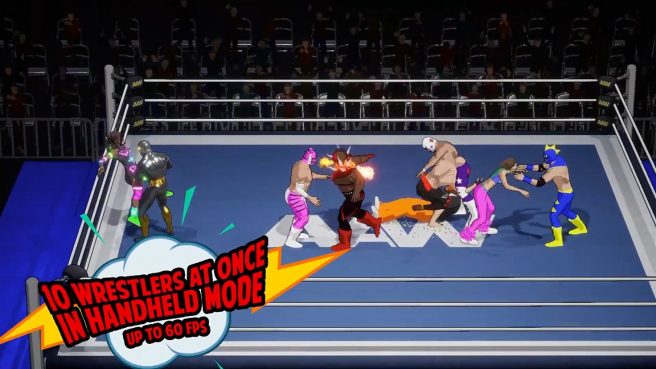 Original (1/13): VICO Game Studio and Reverb Triple XP provided an update on the Switch version of Action Arcade Wrestling today, confirming that the title will be arriving in February.

It’s been nearly a full year since the game was first announced for the system. Originally, the plan was to have it ready for last spring. Action Arcade Wrestling did start to come out on consoles last summer, but we’ve been waiting on the Switch version. Thankfully, it’s almost here.

Perform a BODY SLAM, knock’em down with a CLOTHESLINE, pull off the classic PILEDRIVER AND… shoot LIGHTNING BOLTS into your opponent’s face?! Whatever you do… don’t find yourself looking up at the lights!

Action Arcade Wrestling brings everything you love from 90’s wrestling games with its own twist of chaos and fun. Join the action and step through the ropes in this fast-paced, arcade wrestling extravaganza to superkick the overly simulated wrestling games out of the ring! Choose from a roster of 30+ outrageous wrestlers executing their powerful attacks and superhero-like abilities in the most over-the-top wrestling game ever conceived.

If that isn’t enough crazy for you, jump into the AAW Wrestle Lab to create your ultimate wrestler. The Wrestle Lab provides an unprecedented amount of creation tools where gamers can unleash their creativity. Whether it’s your favorite superhero or most feared monster, the Wrestle Lab is only limited by your imagination.

We have a new trailer for Action Arcade Wrestling below.

Action Arcade Wrestling will arrive digitally on Switch through the eShop.