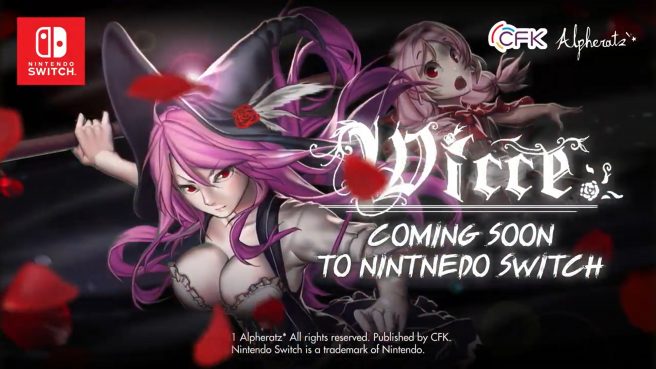 CFK and Alpheratz have announced that Wicce, a 2D action platformer, is making its way to Switch. A release is planned for May, with a final date coming “soon”.

We have the following overview and trailer from CFK:

Wicce is a side-scrolling action game in which players get to journey the dark märchen fantasy world. As a witch living in the gloomy era, players must find the missing daughter in the town overrun by an epidemic.

A witch named Wicce was living with her daughter in a house standing in the deep forest.

One day, her daughter went on an errand but didn’t come back even after the sun set on the horizon.

So Wicce headed to the town to look for her daughter.

What she didn’t expect to see was the town filled with people fallen by disease, and fiends letting out foul aura!

Searching for the dear girl, Wicce fights the fiends and cures people.

But the 「Pope」, having heard of her actions, sees Wicce as the one who caused the epidemic…….

Wicce sets out to find her missing daughter in the town of death. She uses her broom to fight grotesque fiends, cast magic, fly as well as activate various gimmicks in the stage. Featuring a variety of actions with simple controls, the game has players pull through dynamic battles and extreme boss fights where bosses have their own unique patterns.

Wicce will be sold digitally for Switch via the eShop. It will support English, German, French, Korean, Japanese, and Chinese (Simplified and Traditional) language options.