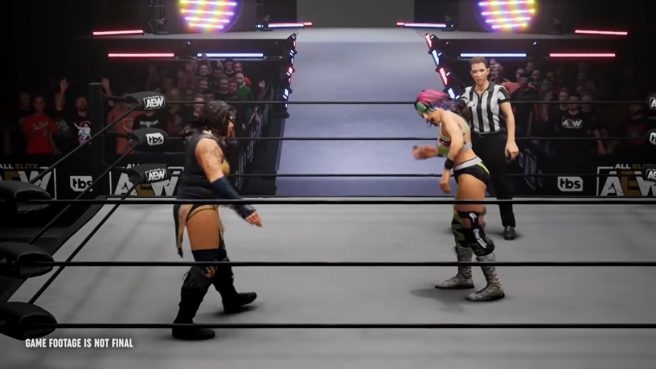 Original (8/1): Yuke’s has been known to be working on AEW: Fight Forever, an upcoming wrestling game, since the end of 2020. There’s been a bit of a question as to which platforms the game will end up on, but it’s currently looking like a Switch version could be in the cards.

A listing for AEW: Fight Forever has surfaced on Amazon UK. The retailer lists a tentative December 31 release date and THQ Nordic as publisher, the latter of which was only confirmed a few weeks ago.

As for the actual game, it’ll offer “some of the biggest legends to enter the ring plus a stable of brand new, high-flying, AEW talent.” Some features include online co-op wrestling with Fight Forever and Tag Team matches, a career mode, customization, and more.

Developed by YUKE’s Co, Ltd., creators of numerous, multi-million unit selling wrestling games, AEW: Fight Forever combines that nostalgic arcade-wrestler feel with innovative All Elite Wrestling finishers and tandem offensive moves. All Elite Wrestling is currently taking TNT and TBS networks by storm every week with their Rampage and Dynamite shows, featuring some of the biggest legends to enter the ring plus a stable of brand new, high-flying, AEW talent. AEW: Fight Forever brings the best of the best from that talent roster together in one game! Online co-op wrestling is going completely next level in Fight Forever with Tag Team matches that feature sequences of team maneuvers performed with simple commands. A deep career mode, wrestler customization, signature AEW arenas, multiple match types and more match types than you can count, including some good ol’ fashioned, unsanctioned fun, all await!

And here’s a quick look at it in action:

The fact that Amazon UK has a page up for AEW: Fight Forever is certainly encouraging, but keep in mind that thus far no official announcements have been made. We’ll let you know if we end up hearing something official that points in either direction.

Update (8/3): AEW: Fight Forever has been officially confirmed for Switch. A new teaser can be found below. More gameplay will be shown at the THQ Nordic digital showcase on August 12.