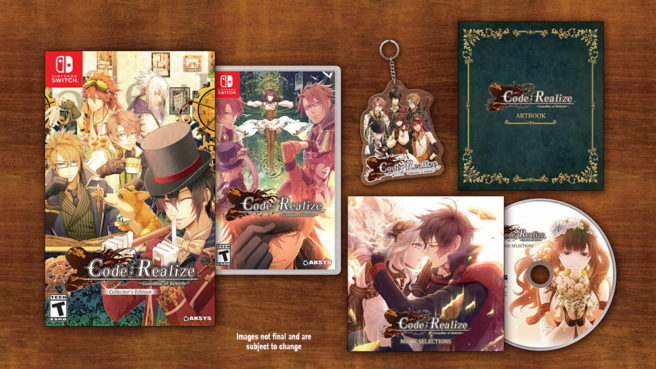 Aksys Games has announced its upcoming lineup of interactive fiction (otome) titles arriving on Switch throughout 2020. Six releases are planned in total, starting with Code: Realize – Guardian of Rebirth on February 6.

Two classic Code: Realize entries are launching soon, with ~Guardian of Rebirth~ coming February 6th and ~Future Blessings~ in April. The Code: Realize games explore the story of Cardia and her adventures in a steampunk version of Victorian England, where she encounters a cast of intriguing gentlemen based on characters from history and literature. A special Collector’s Edition of ~Guardian of Rebirth~ features an exclusive 60 page artbook, soundtrack CD and a collectible 3″ acrylic key chain. The Code: Realize games have been rated “T” for Teen by the Entertainment Software Ratings Board (ESRB). For more information, visit coderealize.us