Alpaca Ball: Allstars due out for Switch in October 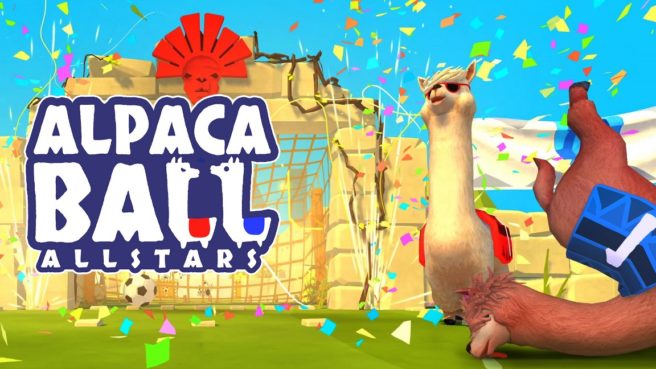 Badland Publishing and Salt Castle Studio have nailed down a release date for Alpaca Ball: Allstars. The physics-based party game will launch on October 15, the two sides revealed today.

Here’s some information about Alpaca Ball: Allstars as well as a trailer:

Alpaca Ball Allstars is a hilarious arcade soccer game that combines the best of wacky classics like NBA Jam with funny physics that make every single match totally unique.

Along with the expected competitive modes, in which up to eight players can participate simultaneously, the title from Salt Castle Studio includes a very funny career mode for one or two players with a crazy storyline in which we will travel halfway around the world participating in all kinds of Alpaca Ball games.

Choose your alpaca, customize its looks and get ready to drill the rival goal using the power and elasticity of their necks. In Alpaca Ball: Allstars there is only one rule: win, and for that you will have to ram your opponents and exploit the physics of the ball to unleash spectacular trick shots, bouncing the ball off the field walls.

Throughout the history of video games there have been many arcade-like soccer games, but none as original and delirious as this one. The key to the mechanics of Alpaca Ball: Allstars lies in the powerful neck of its players, which can hit the ball so hard it literally catches fire. But watch out, the direction of the impacts will vary depending on where your alpaca is facing at the time, which adds a hilarious twist to a game as dizzying as it is exciting.

The realistic physics of the ball, capable of bouncing in unpredictable ways depending on its shape (you will get to play with beach balls, rugby balls… and even dices!) is the central pillar of Alpaca Ball: Allstars, but in this creation of Salt Castle Studio there is also room for fantasy. And we are not only referring to the concept of watching a bunch of alpacas playing soccer: during the games you can pick up various special powers that could turn the scoreboard upside down…

Among these powers, which have a limited duration of a few seconds, there is an american football inspired equipment with which you will be able to knock out your rivals by ramming them, another one that lengthens the neck of the alpacas (multiplying its reach and power), one that dwarfs the rest of the players (including your teammates) or the opportunity to invite an armadillo to roll in the middle of the field, hindering everyone.

The physics of the matches will also be influenced by the design and dimensions of the field. From tiny urban soccer fields (the smaller the size the greater the chaos) to courts without corners that allow you to play real tricks, bouncing the ball as if it were a game of billiards.

About the game modes of Alpaca Ball: Allstars, the best way to learn to play is with the Career Mode, which you can play alone, or with a friend in cooperative mode. You start out as an Alpaca Ball newcomer and embark on an epic quest to become one of the best, form your own team and compete in the World Cup so you can save your home. In your travels, you will visit all kinds of soccer fields (there is even one inside a volcano) all across South America and Europe and compete against the CPU.

But if you prefer to focus on more direct fun, you can also play matches against other human players or CPU (up to 8, in teams of 4 Vs 4), locally on Nintendo Switch and locally and online on Steam via “Steam Remote Play.”

Alpaca Ball: Allstars will be sold digitally for Switch via the eShop.