In the gaming industry, there are many genres that fit an individual title. From shooters to RPG’s, each game has a category it can properly find itself in. Over the years, however, many games (while becoming increasingly more advanced in terms of hardware) have lost a very simple, yet very important aspect: Charm. “Animal Crossing: City Folk” has revitalized that aspect of gaming and has succeeded in bringing to the Wii the single most charming title that I have ever played. From the graphical animations to the terrible but cute one-liners, City Folk keeps things simple; and in this case that is a good thing.

Upon starting up the game, I noticed two things. First, the graphics were nothing to shake a stick at, and second, the characters were ridiculously fascinating. Having never played an Animal Crossing game before, I wasn’t quite sure what to expect. All I knew was that it was a simulation game and that it appeared to be aimed at casual gamers. The first character I met was “Rover”, a dog/cat (cat by looks, dog by name) who was quite energetic and kept me interested until he guided me to my city.

When I arrived, every resident continued to hold onto this charming and quirky personality that the writers have managed to consistently incorporate – including the mayor, and the storeowner. Each character was as fascinating and unorthodox as the last but still completely different. It was a welcome surprise to me that the characters -though of very little actual use- were fairly deep and never failed to spur some sort of emotional response. For instance, the mayor of my town (Tortimer) was one of the first people I met and the reason why the game captured my attention. Upon speaking to him, he went on a short rant about “young’uns” and “whippersnappers” which made me smile a bit. Immediately after learning that I’m a new resident, he asked me what my favorite animal was. As soon as I told him “cat” he changed the subject, never to speak of it again. This unusual conversation nearly made me laugh out loud at how fun the characters in the game are.

Aside from the characters in your town, City Folk does something else very right as well. It keeps things extraordinarily simple. Unlike other simulation games such as The Sims, there are no “jobs,” no “mood meters,” or anything that actually measures how your character will act. Animal Crossing relies solely on your ability to enjoy something so simple. I found it very easy to enjoy the pointlessness to it, but others may not. The entire game revolves around you gathering things and selling them for money, and then using that money to buy things you want. Even though there is no point to it, there is a great amount of satisfaction that can be gained.

It’s important to note, however, that the game is not without its faults. Oddly enough, elements in City Folk that make the game enjoyable are also what hurt the game experience. The “gather then sell” aspect can get ridiculously repetitive to the point where you don’t feel like playing, things tend to move rather slowly at times, and the game has an all over boring feel to it sometimes. 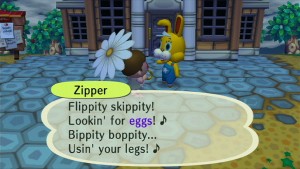 Possibly the best aspect about the game, or at least the most charming, are the one-liners. When you catch a fish or a bug, your character holds it up and a terrible, terrible pun or some other form of low humor is displayed in text. From “You caught a squid. Yes a squid!” to “It’s a migratory locust! Migrate into my pocket!”, each and every one proudly stands as some of the worst humor in history, and yet that corny entertainment is what makes it so enjoyable.

Another positive feature about the game is the city. It makes City Folk twice as pleasant as it would have been without it because of the slew of shops and activities that are available for exploration. There is a fortuneteller that tells you your fortune based on your zodiac sign, a shoe shiner to change your shoes, an auction house to sell your things, a theatre to gain “emotions”, and more. The only downside to the city is that it is rather small, taking mere seconds to run from one end to the other.

The Wi-Fi aspect of Animal Crossing is also a smart inclusion but can often be troubling to use. Still, there plenty that can be done by connecting to the internet. You can play with up to four friends at their town or yours, go see fireworks or a show with them, and even have fishing contests. The issue is that it does lag, and often quite badly. WiiSpeak lags as well, but this is much more manageable. That isn’t to say that it’s unplayable, but occasionally your friend will bounce around or stop for a few seconds at a time – which, thankfully, has no effect on you.

It’s also great that there is plenty to see and do. There are hundreds upon hundreds of clothing options, tons of fish, bugs and fossils to collect, stars to turn into constellations in the night sky, an impressive amount of furniture, wallpaper and flooring, and much, much more. I can truly say that it will be years before I see everything this game has to offer, and even then the customization is so extensive that I’d still be playing it. Believe it or not, there is even a cat with a blank white face that asks you to draw a face for her because she lost hers. It is one of the most customizable games I have ever played, and this is only mentioning about half of the obtainable things to customize. 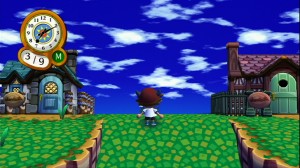 WiiConnect24 usage in City Folk feature is much nicer than compared to the Nintendo Wi-Fi Connection. The ability to place your items in the auction house for all of your friends to see and bid on, the ability to send letters with gifts, and many other options are quick, user-friendly and fun to use. Buying different styles at the store can customize the paper you send the letters on.

Occasionally, playing City Folk can feel more like a task than a game, making you feel like you have to play it that day rather than experiencing it when you actually want to. In these cases, I find it hard to have fun, and often regret when I try to, but taking into account the amount of good things the game possesses, I can’t help but like the game.

All in all, Animal Crossing: City Folk is a solid, simple, charming game that could very well keep you playing for years. In addition, it is the kind of game you’ll want to play everyday, if only for a few minutes at a time. Don’t expect something in depth and hardcore, because City Folk is the opposite of that. It’s simple, it’s fun, and it’s pleasant, which is exactly what it was meant to be. From the moment you start the game to the moment you’ve realized that you have been playing for six months, you’ll be having the same amount of fun. There is no “replay value” because the game can’t be beat. It is fun, but not amazing, each and every day you play it, never faltering from that better-than-average level it had when you first started.

This game is for people who:
-Want something casual, pointless, fun and charming
-Enjoy social simulators
-Newcomers to Animal Crossing
-Who want a solid game to play for years

This game is not for people who:
-Want an in depth, hardcore game
-Want a point to their game
-Want a story driven game