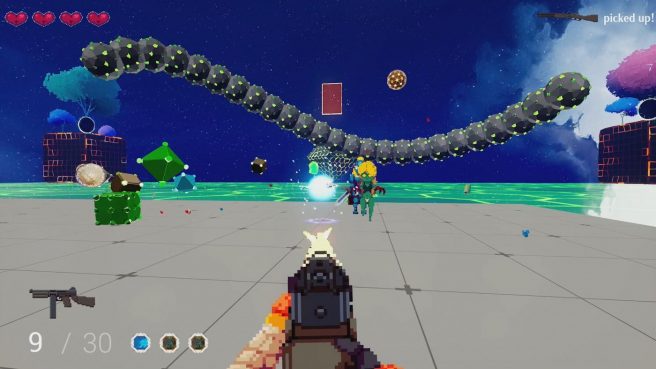 Original (9/6): The arena-based first-person shooter Rule No.1 will be appearing on Switch, publisher Eastasiasoft and developer Walk Without Rhythm Games have announced. It will be available this fall.

For more information about the game, read the following overview:

Massacre waves of sentient metallic geometry as you attempt to survive the first-person gunslinging challenges of Rule No. 1! In this arena-based FPS with a dash of rogue-lite randomness, your one job is to blast everything in sight while dodging incoming threats. Clear waves of metal menaces and their pixelated minions to keep your spicy female player character from biting the dust!

Featuring a foul-mouthed waifu that’ll tell you off for making her die and respawn too often, Rule No. 1 is fourth wall breaking fun that’s accessible enough to train up newcomers to the genre and intense enough to help veterans hone their skills. Situational awareness is paramount to success, especially as difficulty escalates into bullet hell territory. No run will be the same, making this an experience you can keep coming back to anytime, if the alluring heroine wasn’t already enough for that.

We’ll pass along a final release date for Rule No.1 once that information has been shared.