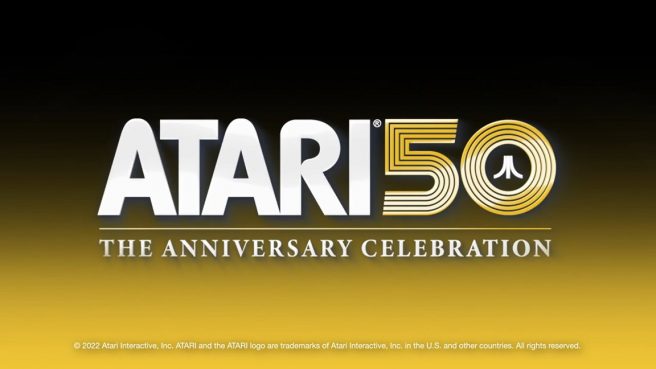 Atari is teaming up with Digital Eclipse on Atari 50: The Anniversary Celebration, a special package for Switch and other platforms. A release is planned for this holiday.

According to the official description, Atari 50: The Anniversary Celebration “takes players on an interactive journey through 50 years of video games via interviews with designers, developers and industry leaders, documentary footage, product design documents, high-resolution original artwork, and a specially-curated list of more than 90 playable games.” Titles from the arcade, 2600, 5200, 7800, Atari 8-bit computers, Lynx, and Jaguar will be included. Additionally, Digital Eclipse has made the Reimagined series, which is comprised of “six new games that revisit, mash-up and reimagine Atari Classics” – the lineup is Swordquest: AirWorld, Haunted Houses, VCTR-SCTR, Neo Breakout, Quadratank, and Yars’ Revenge Reimagined.

At the heart of Atari 50: The Anniversary Celebration are the Interactive Timelines, which combine historical trivia, digital artifacts, all-new video interviews, and playable games into one singular experience. When you encounter a game in the Timeline, you can immediately play it without losing your place.

The massive list of games spans six original Atari console and home computer platforms and generations of arcade titles, the most ever included in a collection by the team at Digital Eclipse. For the first time ever, games from the cult favorite Atari Jaguar and Atari Lynx platforms will be playable on modern consoles. Behind every game are the stories of Atari, what was happening at the company, what went into the creation of the games and the hardware on which they ran, all told by the people who were there. It is a rare opportunity to get a rich behind-the-scenes look at the history of video games.

In addition to presenting these Atari classics exactly as they were, the talented team at Digital Eclipse has also created the Reimagined series – six new games that revisit, mash-up and reimagine Atari Classics. Each of these new games is included in Atari 50: The Anniversary Celebration.

• Swordquest: AirWorld – Yes, you read that right: After nearly 40 years of waiting, the team at Digital Eclipse has created the fourth and final entry in the legendary Swordquest series, inspired by the design concepts of original Swordquest creator Tod Frye. Who will be the first to solve its mysteries – and finally complete the quest?
• Haunted Houses – The original “survival horror” game for the Atari 2600 gets a modern 3D voxel-based sequel, featuring more houses, more spooky situations, and more urns.
• VCTR-SCTR – This mashup celebration of the vector era of gaming combines the gameplay from Asteroids, Tempest, and other vector-based arcade classics into a single, continuous challenge.
• Neo Breakout – An amazing and addictive two-player competition that combines the best features of Breakout and Pong, with a modern graphic style.
• Quadratank – The first new entry in the classic Tank series since 1978 combines features from the original games with four-player fun in team or free-for-all modes.
• Yars’ Revenge Reimagined – Howard Scott Warshaw’s masterpiece for the Atari 2600 gets a whole new look – and you can swap between original and modern graphics at any time! Designed by Digital Eclipse studio head Mike Mika, who created the Game Boy Color version of Yars’ Revenge in 1999.

Curated List of Classics: 90+ classic games lovingly presented with best-in-class emulation and modern quality-of-life enhancements – and the ability to play classic games that have not been available for ages. Platforms include Arcade, 2600, 5200, 7800, Atari 8-bit computers, Lynx, and Jaguar.

All-New Videos: Over 60 minutes of exclusive video interviews with key players in the games industry –early Atari designers and engineers and other luminaries of the gaming world — as they discuss Atari’s enduring impact on the video entertainment landscape.

Everything Unlocked: All game and bonus content is immediately available to players to enjoy at any time they want, in any order they want.

A retrospective on gaming history that is a must-own for collectors and fans of video games.

Get a look at the first trailer for Atari 50: The Anniversary Celebration below.