Posted on December 14, 2017 by Matt(@OnePunchMaz) in News, Screenshots, Switch 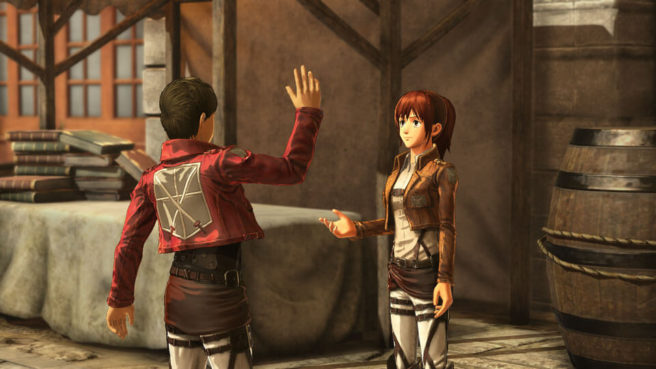 Koei Tecmo has updated the official Attack on Titan 2 website with some character biographies and new details on various game systems like scout missions and character development. We’ve rounded those up below, alongside some new screenshots.

The character creation studio offers a multitude of customization options, including the ability to tweak Body Shape, Hairstyle, Facial Features, Clothing, and Tone of Voice.

Visiting the Titan Research Room will allow players to view the Titans they’ve caught using a Restraining Gun in battle, as well as read through detailed information to aid them in future encounters.

The player will be able to develop equipment such as blades, gases, and ODM gear.

The player can enhance their abilities to achieve better results in battle.

Scouts are able to take on scout missions from regiment officers. These missions are a good avenue for gaining EXP, regiment funds, and rare materials—ones you would not come across even in important missions.

You can choose which allies you want to join you during scout missions, and your friendship level with such characters will be raised.

Regiment Administration is a place where you can make proposals regarding regiment affairs. Proposed policies will remain in effect until you propose a new policy or return from a mission. R&D allows you to develop and upgrade bases for use in the field.

Policy allows you to make a wide array of proposals to aid you both in daily life and in combat. R&D allows you to develop and upgrade bases for use in the field.

The player will be able to deepen relationships with scout members such as Eren and Levi. You can enjoy side stories when you raise friendship levels to a certain extent.

A graduate of the 104th Cadet Corps wherein he graduated sixth of his year ranking below Eren. Hailing from the Trost District, he hopes to join the Military Police Regiment and earn the privilege of living in the Interior. While at the Cadet Corps, his belief that humanity cannot defeat the Titans constantly placed him at odds with Eren who fervently believed in the complete elimination of the Titans. Among the 104th, he is especially close to Marco who has a similar goal of joining the Military Police Regiment. While he is seen to be conceited and selfish at first, certain events will allow his skills as a leader to bloom.

A graduate of the 104th Cadet Corps wherein he graduated eighth of his year ranking below Marco. Hailing from Ragako Village in the southern district of Wall Rose, he originally hoped to join the Military Police Regiment but this goal was soon shaken after coming into contact with Eren’s strong beliefs of eliminating the Titans. He is seen as the class clown and is a self-proclaimed “Natural”. However, despite having poor judgement and comprehension, he makes full use of his small frame by specializing in swift movement.

A graduate of the 104th Cadet Corps wherein she graduated ninth of her year ranking below Conny. Hailing from Dauper Village in the southern district of wall Rose, she mainly lived in the forest as hunter wherein she developed a sharp intuition akin to an animal. However, despite her valuable skills, she often has trouble working in groups. She constantly speaks in a polite manner even to her fellow Cadets and her unusual attachment to food typically leads her to break rules and regulations to obtain nourishment.

A graduate of the 104th Cadet Corps wherein he graduated seventh of his year ranking below Jean. Hailing from the town of Jinae in the southern district of Wall Rose, he hopes to join the Military Police Regiment and serve the under the King. Due to his tendency to focus on the larger strategy rather than his personal achievements, he is seen as a natural-born leader.

A graduate of the 104th Cadet Corps. Although he is typically servile, cowardly, and has a constant pessimistic attitude, he is a kind soldier at heart who always has his family in his thoughts. Despite volunteering to enter the Cadet Corps, his fear of fighting Titans never wavered.