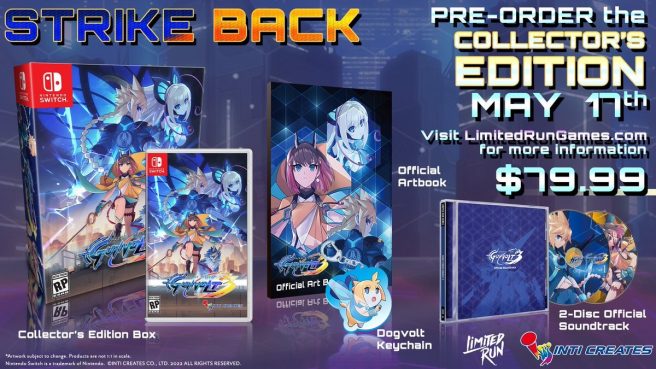 When Azure Striker Gunvolt 3 received its July release date a couple of months ago, Inti Creates also confirmed that it was teaming up with Limited Run Games on a physical release in the west. Further information has now been shared.

Azure Striker Gunvolt 3 will have a standard release on Switch as well as a collector’s edition. With the latter version, buyers will receive a physical copy of the game, 2-disc original soundtrack, art book, and Dogvolt keychain.

Below is some information about Azure Striker Gunvolt 3:

New protagonist Kirin fight along side Gunvolt, allowing players to switch characters on the fly, adding a new element to the series’ high-speed 2D action gameplay. Players will also welcome the return of the “Story Mode+ system where the rich story and characters interact in dialogue during the game’s missions. More familiar faces will also return as “Image Pulses”, a new system that allows players to use characters from Gunvolt’s past in combat. Over 150 varieties will be available!