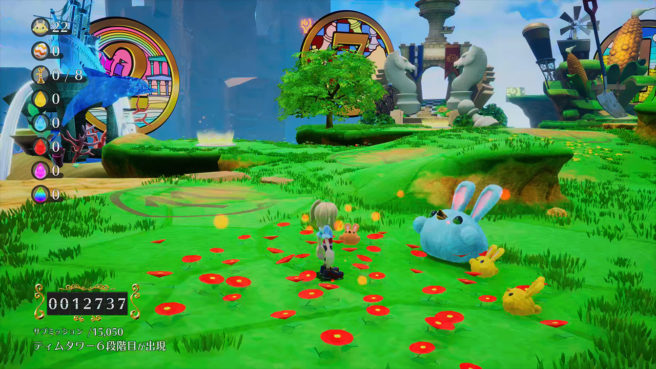 The official website for Balan Wonderworld has updated, revealing the Isle of Tims. Based on what players can do with Tims, it sounds a lot like the Chao Garden in the Sonic games as they can grow and help you throughout the game.

Here’s the full rundown as to how Tims work:

A mysterious area that is influenced by the psychological state of the people in the real world.

This is where Leo and Emma first arrive, after being guided by the enigmatic maestro, Balan…

Using this area as a hub, they’ll explore the worlds born from the hearts of the inhabitants, freeing their hearts from torment and worry.

Mysterious creatures that live on the Isle of Tims. They are born from happiness felt by inhabitants of the real world.

There are Tims of all colors and personalities, and they’ll help you on your adventure by using their unique quirks.

What is Happiness Time?

When the hearts of the inhabitants of the real world lean towards positivity, more and more Tims are born. If people’s hearts lean towards negativity, there will be fewer Tims and Happiness Time will stop.

The Tims will grow, changing color and attributes as you give them different drops collected from the worlds inside the hearts of the inhabitants.

Different color Tims are good at different things – for example, the red Tims will attack for you, and the pink Tims will find items. It’s important to raise lots of different Tims.

When there are more and more Tims…?

The Tim population increases as you give them more drops, or as you find Tim eggs in the worlds inside hearts.

As the number of Tims increases, the Tim Tower on the Isle of Tims grows larger. It seems like something might happen…?

We also have a number of screenshots:

Yuji Naka, who’s leading the way on Balan Wonderworld, was heavily involved with the Sonic Adventure games. That’s where the Chao Gardens were heavily featured. Balan Wonderworld does seem to be taking some inspiration from Sonic as well as Nights into Dreams, another game in which Naka was the producer.