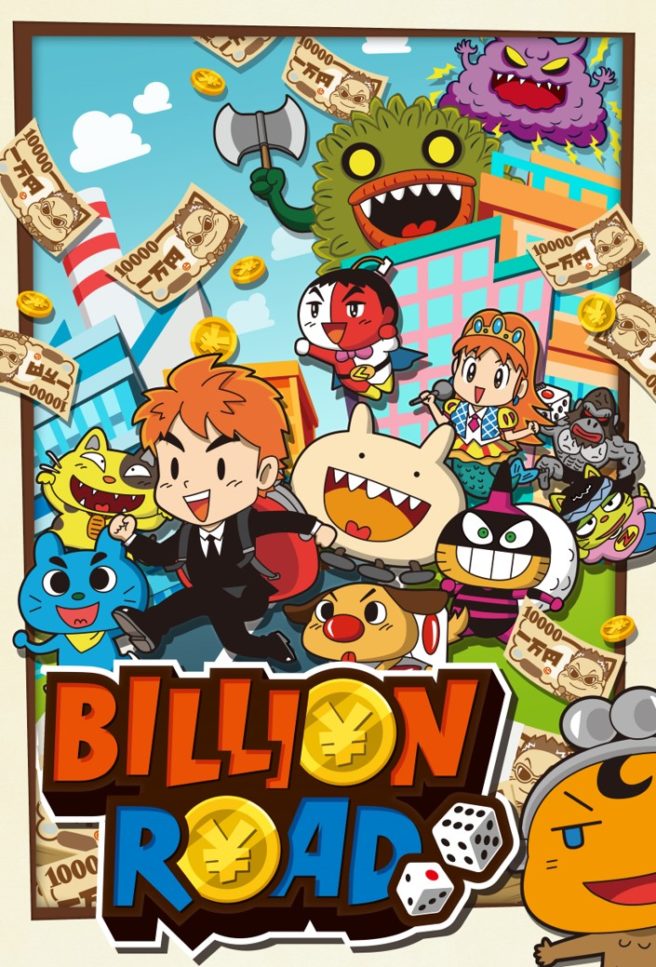 Billion Road, Bandai Namco’s board game experience that initially debuted in Japan last November, is coming west. actill announced today that it has picked up the overseas publishing rights and will release it in March 2020.

Here’s an overview of Billion Road:

Billion Road takes you on a journey to a huge number of real-life prefectures and cities throughout Japan, and your goal is to be the richest player in the game when you pull into the final destination. Up to 4 players can compete using a single Joy-Con for Nintendo Switch or online for Steam. It’s a race against the clock to buy up businesses, landmarks, and anything else that comes up for sale! A variety of iconic monsters will also appear to help or hinder your progress, depending on their mood. You’ll need smarts, determination, and a little bit of luck to come out on top, so prepare for the race of the century in an effort to become Japan’s next big billionaire!

More info about Billion Road is available on the Billion Road website, which will be updated constantly to showcase what the game is all about. Along with basic game details, we’ll also be introducing some of the most valuable goods and properties in the game, including details and actual photos of their real-life counterparts! If that wasn’t enough, leading up to the release we’ll be giving away a variety of authentic souvenirs from all over Japan. So strap on your strategy boots and get ready for a digital road trip!

The core objective in Billion Road is pretty straightforward – travel all across Japan and earn more money than anyone else. You earn money by landing on property squares with investment opportunities, like a sushi restaurant in Ginza or an animation goods store in Akihabara. After you invest, you’ll have to wait until March rolls around for those investments to pay off. In the meantime, be on the lookout for errant monsters that may shower you with riches…or throw a wrench in your plans! You can also earn extra money by landing on item squares, which can either help you reach your own goals or simply ruin your rivals’ plans. If you finish the game with the most money…you win!

Key Features
– Brains, Bravado, and Lucky Breaks! Dice and random events will help decide your fate…but you’ll also need to invest wisely, take calculated risks, and rely on the whims of unpredictable monsters if you want to become Japan’s next billionaire!
– Over 30 items and 50 monsters! You’ll encounter dozens of items and monsters, each with their own effects. Use them to push your opponents around, ruin their investments, and generally make their lives miserable. But be careful, because while they may help you earn money and pull ahead, they can also make bad purchases or investments on your behalf. This can change the game at a moment’s notice, so study the monsters well to make sure you know when to walk away, and when to run!
– Multiple Modes Means Maximum Mayhem! Tournament Mode is a single-player version that lasts for 30 in-game years, -while Skirmish Mode is a quick multiplayer experience that lasts a mere 36 months. Whether long or short-term, it’s sure to get the adrenaline pumping!
– Show Your Friends Who’s Boss! Play with your buddies by sharing a single Joy-Con on Nintendo Switch, or play with friends online through Steam!

And a trailer from the Japanese edition:

Billion Road will be sold digitally on Switch in the west.