Bite The Bullet announced for Switch 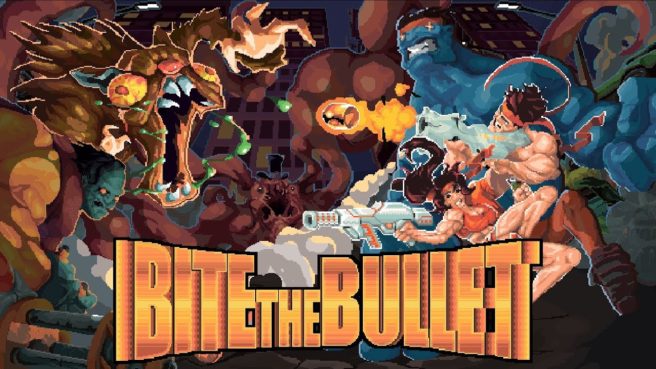 Publisher Graffiti Games and developer Mega Cat Studios today announced that the upcoming roguelite RPG “Eat ‘em Up” shooter Bite The Bullet is coming to Switch. A release is planned for 2020.

Here’s an overview of Bite the Bullet, along with a trailer:

In Bite the Bullet players satisfy their appetite for destruction by eating enemies, bullets and more to powerup their character, weapons, and abilities. Players gun down adversaries with a barrage of bullets before dining on their corpses to craft new weapons, energize skills and special attacks, and transform into a powerful Zombro form to smash foes into smithereens. There are three branching skill trees based on diet – and players must always remember, you are what you eat!

Discover the intensity of blasting monstrous creatures and feasting on their corpses in this new gameplay trailer. And for the first time, get a glimpse of Bite The Bullet’s brand new heroine, Chewella.

– Chow Down on Everything – Devour enemies, walls and even bullets to powerup your character, weapons and abilities.
– Food Based Class System – Choose between diet-based classes like the vegetarian Slaughter of the Soil or the blood-soaked Gorivore, all based on what you eat. Chew carefully because every enemy has its own nutritional information, and your body type will change based on the types of enemies you consume.
– Loot Powerful Weapons – Defeat enemies and take their mighty weapons with fun modifiers, like Spicy Critter Cannons and Organic Meat-Seeking Missiles.
– Customize Your Character & Weapons – Wolf down special types of characters and enemies to craft exotic new weapons and customize your character’s synergistic skill tree that offer abilities like Napalm Vomit and Appetite for Destruction.
– Transform into Powerful Zombro Form – Spice up combat to the next level by mutating into Zombro form and smashing enemies into bite-sized bits.

Bite The Bullet will be shown off at PAX West at the Graffiti Games booth, 5201, between August 30 and September 2.