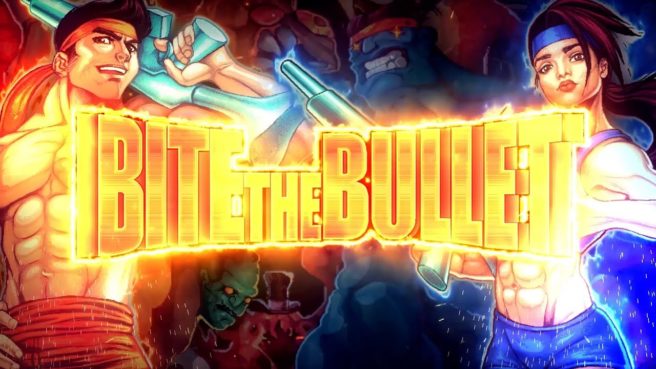 After it was announced last year, Graffiti Games and Mega Cat Studios have set a final release date for Bite the Bullet, the roguelite RPG shooter. It’ll be out on Switch as an eShop download starting August 13.

We have the following overview and trailer for Bite the Bullet:

Bite the Bullet is the world’s first Run & Gun & Eat. In this roguelite RPG shooter players must eat enemies, bullets and more to powerup their character, weapons, and abilities. Gun down zombies, robots and giant mutant bosses with a barrage of bullets before chowing down on their corpses to craft new weapons, unlock new abilities and special attacks, and transform into a powerful Zombro form to smash foes. Explore four character classes and a skill tree based on a player’s selected diet – and remember, you are what you eat!

Key Features Include
– Devour enemies to powerup Chewy/Chewella, weapons, and abilities.
– Chow down on everything – enemies, walls, even bullets.
– Play solo or with a friend in local co-op.
– Four character classes (Carnivore, Herbivore, Omnivore, and Robovore – which means eating metal) that have their own unique abilities and perks.
– Gorge on 50 levels.
– Character customizations with a deep, branching skill tree.
– Loot powerful weapons with fun modifiers such as Spicy Critter Cannons.
– Craft exotic new weapons by wolfing down special types of characters and enemies.
– Eat enemies to energize skills and special attacks.
– Use a highly advanced shield for protection from oncoming fire or knock enemies away.
– Earn action hero bandanas by fully completing each world.
– Chew carefully – every enemy has its own nutritional information, and a body type will change based on the types of enemies consumed.
– Transform into the powerful Zombro form and smash enemies into bite-sized bits.