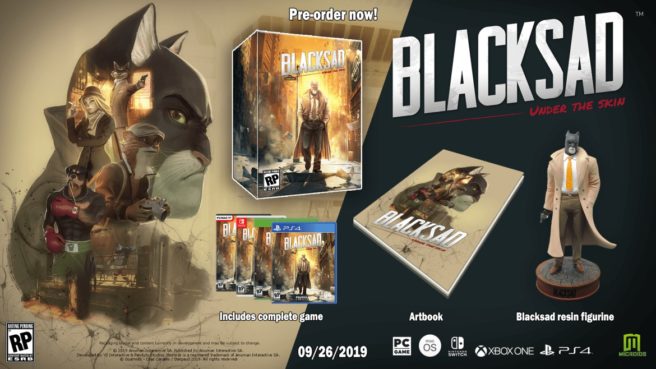 Microids, Pendulo Studios, and YS Interactive have dated the narrative-adventure game Blacksad: Under the Skin. It’ll be available for Switch on September 26.

Also announced today, a collector’s edition is planned. Buyers will receive the game, a resin statue, and an art book.

Here’s the latest on Blacksad: Under the Skin, along with a story trailer:

The 50’s, New York City: Joe Dunn, owner of a boxing club, is found dead. Meanwhile, rising star Bobby Yale, due to take to the ring for the most important fight of his career, has mysteriously disappeared. Sonia Dunn, Joe’s daughter, takes over the gym and must deal with its financial woes. She hires private detective John Blacksad to investigate Yale’s disappearance.

With its anthropomorphic characters and its incredible 1950’s feel, Blacksad: Under the Skin delivers all the eerily dark adventure of a detective novel, just like the eponymous comic book series. While embodying detective John Blacksad, players will have to conduct this adventure in their own way. Depending on their decisions, players will influence the relationships between Blacksad and the other characters as well as the very end of the investigation.