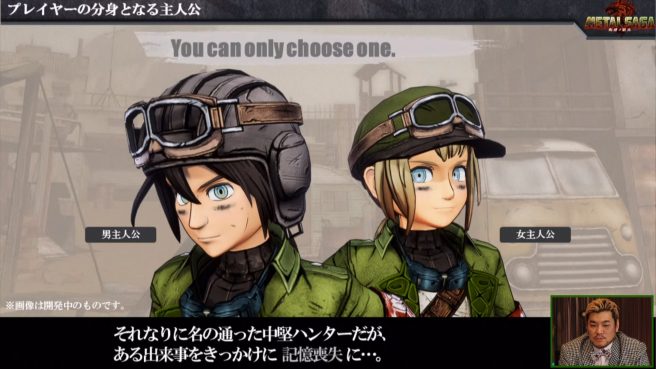 During the Metal Max 30th Anniversary Live Stream today, Success and 24Frame confirmed that Metal Saga: Hangyaku no Rouka is in the works for Switch. While there’s no word on a western release currently, the game will support “Japanese and more.”

Mankind has become a threat to humanity.

The game is set in “a world where the threat of NOA as disappeared.” The enemies of mankind are the people of the world influenced by endless desire.

This is a story of resistance in a distorted world dominated by desire.

In the town of Rusty Garden, the resistance organization known as “Heaven’s Wall” established their base.

The protagonist is a well-known mid-level hunter , but loses their memory following a certain event…

Although previous entries in the series used a random encounters system, all monsters with a bounty on their head will appear as symbols in Metal Saga: Hangyaku no Rouka. Since monsters act within their own ecosystems and thoughts on the fields and in dungeons, players can enjoy an even more realistic post-apocalyptic world. You can also avoid unnecessary battles by averting monsters.

With the change to symbol encounters, the more realistic battles now unfold seamlessly on the field. Combat can be described as a seamless transition from the series’ traditional command-based battles, with improvements made to prop up systems that were not well received in previous games.

By utilizing a “Strategy” that makes it possible to eliminate the labor of repeated command inputs that was tradition in the past, repetitive tasks such as leveling can be done more comfortably. Characters whose Strategy is set to ON will act according to pre-defined guidelines. You can also switch between Strategies in battle based on the situation, such as in bounty battles.

Build Your Own Villa

Expanding upon the gifts system of interiors and costumes that was popular in previous titles, Metal Saga: Hangyaku no Rouka will allow you to have your own “villa” on a small, uninhabited island that you can freely cultivate. You can customize interiors, as well as construct various facilities, set up your own garage car wash, and even invite your favorite characters to live in your villa to create your very own hideout.

Metal Saga: Hangyaku no Rouka has not yet received a release window at this time.