BPM: Bullets Per Minute getting physical release on Switch 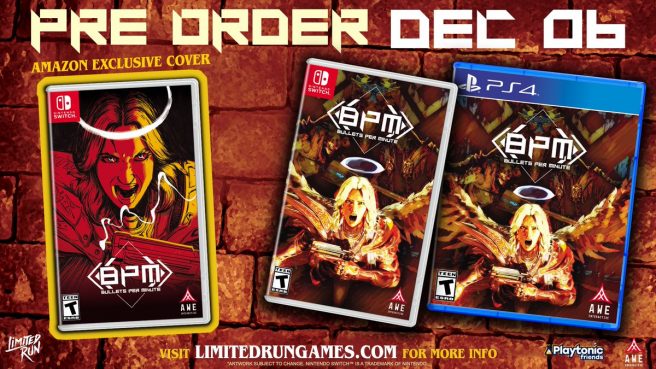 BPM: Bullets Per Minute will have a physical release on Switch, Limited Run Games announced today. The title will be offered as part of its distribution line.

BPM: Bullets Per Minute originally appeared on Switch this past September. The game was originally published only as an eShop download.

In BPM, all of your actions and the actions of your enemies are tied to the beat of the music. Your enemies perform a dance-like sequence of attacks to an epic rock opera. Inspired by retro shooters of the ’90s, it is fast, frenetic and rhythmical. You can double jump, dash, rocket jump and bunny hop to evade your opponents.

Your goal is to reach the end of randomly generated dungeons, collecting different weapons, abilities and items each time you play. These weapons and abilities can radically alter the way you play, making each playthrough unique.

You must defeat 7 bosses to reach the final boss. Each boss moves and attacks in a unique way that you must learn to exploit if you want to succeed. Some attacks require you to jump over fields of lava, some to dodge fast projectiles, some to hold fast for a beat.

Get ready to test your metal with the Overdrive update. New characters, more weapons, a brand-new chapter and all-new difficulty modes: Practice and Hellish.

Pre-orders for the physical version of BPM: Bullets Per Minute for Switch open on December 6, 2022. You’ll be able to reserve it on Limited Run Games here. It’ll also be sold on the company’s Amazon store with an exclusive cover.