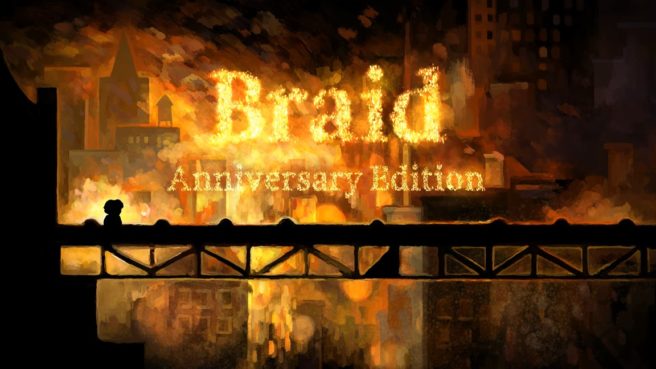 Thekla today unveiled a new version of the critically-acclaimed puzzle-adventure game Braid, and it’s coming to Switch. The redone version – titled Braid Anniversary Edition – is targeting a release on the console in Q1 2021.

I’m very happy to reveal that we’ve been working in secret on Braid, Anniversary Edition for a while now.

Back when I was originally working on Braid, even when it was a simple project with ugly programmer art and looked nothing like a respectable game, I knew that one of the primary goals of the project was to treat video games as a medium with serious artistic potential. That potential involves longevity: many great works of painting, sculpture, and architecture have lasted for centuries and inspired generations of people. Video games weren’t like that back then (and still mostly aren’t today), and I knew I couldn’t predict what would be necessary to keep the game alive and available many decades into the future; but I knew it was part of the project, and that I would try my best.

Back when Braid was originally being developed, with its launch platform being the Xbox 360, 720p seemed like a pretty high resolution. Neither the Xbox 360 nor the PlayStation 3 could render most games at higher resolution than that; a few games could barely do 1080p, if they were very spare with regard to per-pixel detail, which Braid was not (Braid’s style involves drawing lots of translucent particles over each other, which means each pixel is drawn many times!). But when David Hellman came on to the project to do the game’s visuals, we decided we would future-proof the game by drawing all the source art at *twice* 720p, then scale it down for the game’s release. At the time, around the year 2007, this was difficult to do; the tools we were using would chug unresponsively when trying to edit such large bitmaps. But surely this would all be worth it, because it would allow us to re-release the game with sharper graphics later on!

We just didn’t think far enough ahead, I guess; before too long, 4k monitors became available, some folks are using 5k monitors, and 8k is on the horizon (though that seems pretty excessive to me, right now!) If you play original Braid on a 4k monitor, the result is blurry and unpleasant to look at. The original double-scale art that we had archived for Braid would still be blurry at 4k, and anyway it was never really meant to be seen at that level of detail.

So, if we want people with modern computers to be able to enjoy the game the way it was meant to be played, how do we do that? Well, I guess the answer is for David to repaint the whole game at much higher levels of detail, so that is what we did. While we were at it, we could add extra animations and effects to make movement feel better; we could use more sophisticated brush-stroke effects to animate the foregrounds and backgrounds; we could go to some of the scenes that, in retrospect, could have used more attention in terms of visual concepts like unique landmarks, and build them out into what they deserved to be. Then we could upgrade the sound and music (the original sound effects were mostly bought by me for 99 cents each from a random sound-effects web site); Martin Stig Andersen (who worked on Control, Inside, Limbo, and other games with great audio) and Hans Christian Kock (who has done extensive film and TV work) have been handling this and the results are very moody. Don’t worry though, the soundtrack is all the same music, though the guys have done some great mixes that really amplify the mood in the late-game.

In fact, the whole time, one of the guiding principles has been that we must not _Star Wars Special Edition_ the game. Greedo doesn’t shoot first, we don’t add a bunch of CGI that sticks out like a sore thumb and ruins the mood, and so forth. So whenever we add a graphical enhancement, we’re careful to respect the original game, and to ensure the new thing fits well. Sometimes this is very difficult! But it’s important that we don’t change the fundamentals of the game in the process of upgrading it.

If you miss old Braid, you can toggle between the original and the _Special Addition_ at any time by pressing a controller button or keyboard key. This changes not only the level of graphical detail, but the sound effects and music and the extra elements in the scene. It’s a cool effect, and we use it sometimes in the commentary when talking about the changes we’ve made.

Oh, I haven’t mentioned the commentary yet!

Of course it was natural to think of doing commentary in a re-release like this. I wish more games had good developer commentary in them. But as I think about the games that have commentary, my impulse is, I want to push this a lot further. I want to go much deeper into the subject matter than developers usually do; I want to say stuff that really gets to the heart of why things are the way they are, rather than just saying some surface stuff for the sake of doing commentary, as often happens. I want to cover all subjects involved in the game — art, programming, game design, level design, history of independent games, whatever else — and if you want a high-level, short explanation, you can get that, but if you want a 20-minute-long explanation of why a particular puzzle is the way it is, you can get that too. You can follow particular threads of commentary spatially, through wormholes that go from level to level, to see examples of particular concepts; the commentary has lots of markup so we can circle stuff on the screen, point arrows at whatever visual detail we are talking about, show diagrams, play back recordings of gameplay to show what happens if you try doing this or that in a particular level … and many other capabilities.

The goal is to make it the craziest, most-in-depth commentary ever put in a video game.