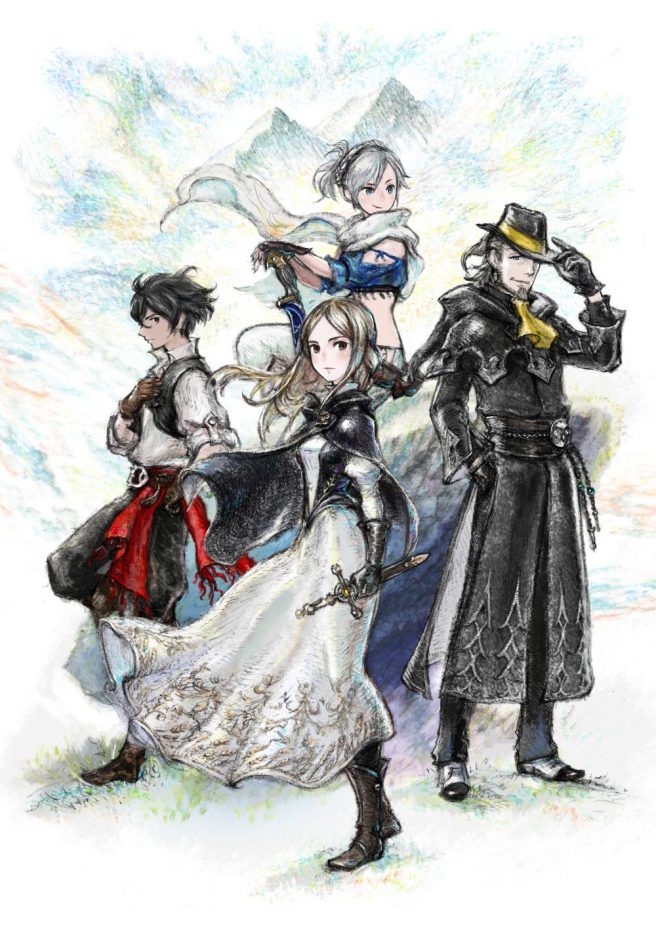 Square Enix has unveiled a great many new details on Bravely Default II, along with some new art and gameplay screenshots. Check it out below.

An orthodox evolution of the Bravely series. The warm, miniature garden-esque world is depicted even more beautifully in Bravely Default II.

The Continent of Excillant

Various worlds fill out the continent of Excillant, where our story is set. What awaits our heroes before they set out to accomplish their goals…?

A country turned into a desert by the lumbering and wars by the dynasty of 200 years prior. Although underground water veins were discovered, the town is beginning to submerge as a result. It is also known for its luxurious casino hall.

A country established by mages with Emma Odilia at the helm nearly 50 years prior. Mages have been dedicating themselves to their studies at the Magic Research Institute, which also serves as a government body, but now the town is overgrown with vegetation and in disorder.

First Prince Castor (voiced by Satoshi Hino)
The first prince of Savalon, prominent in the literary and military arts.
Although he participates on the council on behalf of King Leon, he is worried about its current state under the control of wealthy merchants who prioritize profits over national politics and the people’s happiness.

Second Prince Boor (voiced by Shougo Sakata)
Prince Castor’s younger brother. He is a kind prince who cares for and worries about his brother, who tends to be reckless. He is currently away from Savalon, studying abroad to expand his horizons.

Olfa Dragordia (voiced by Nobuo Tobita)
Troubadour Asterisk Holder.
A poet employed by Bernard Alphard, owner of the casino hall.
A man who loves tragic plays and often speaks in a way belittling of others. He was once employed as the court poet of Musa, but was banished from the kingdom.

Shaula Clarence (voiced by Junko Minagawa)
Gambler Asterisk Holder.
A voluptuous gambler who frequents the casino hall.
A wicked woman who challenges the men seduced by her beauty to card games, taking all their money and using them as pawns.

Nihal (voiced by Yukiyo Fujii)
Beastmaster Asterisk Holder.
A reticent woman who puts on beast and animal performances at the casino hall.
She was a member of a traveling acrobatics troupe, but was picked up by Bernard Alphard after a monster attack left her alone.

Bernard Alphard (voiced by Takaya Kuroda)
Thief Asterisk Holder.
Owner of Savalon’s famous casino hall.
A man who built the casino hall of a lifetime and is now a member of the council. He is the one who discovered the underground water veins and brought an influx of water to Savalon.

Emma Odilia (voiced by Masako Katsuki)
Elvis and Rody’s late master. As the central figure in the founding of Wiswald, she was a just and impartial mage.

Lily Grenadine (voiced by Miki Narahashi)
Hunter Asterisk Holder.
Rody Grenadine’s wife, and the woman who supports him behind the scenes.
Since losing her daughter, she has holed herself up in the forest near the town. However, she is said to be living there with her daughter who died…

Shield Master Asterisk Holder.
Guardsman of the Magic Research Institute. Although born in Rimedahl, he was taken in by a distant relative living in Wiswald after the death of his parents. He blames himself for the death of Rody and Lily’s daughter.

In addition to a traditional, turn-based battle system, you can enjoy innovative and strategic battles unique to the Bravely series with elements such as “special attacks” that buff your party in real-time, and “support abilities” that can be combined with multiple jobs.

Special Moves
In addition to powerful “special moves” that can be activated under certain conditions in battle, dedicated special move background music buffs the entire party. The buff remains for long as the music continues to play after activation, giving you the opportunity to quickly wipe out your enemies.

—Beastmaster Special Move: “Let’s Do Our Best Together!”
Summons a large number of monsters and unleashes a powerful physical attack on all enemies. Increases the entire party’s physical attack and magic attack power.

Use special moves to wipe out enemies in real-time.

By mastering a job, in addition to command abilities you can use in battle, you can also equip and learn support abilities that buff your character. Learned support abilities can be equipped even if you change jobs, allowing you to combine them with other jobs.

—“Aspir Attack” (Black Mage)
Restores MP based on the damage dealt by the “Attack” command.

By slashing your sword at monsters wandering the field, you can start the battle with Brave Attack activated to gain an additional Brave Point (BP). You can also use your sword to cut the grass on the field to find items.

—The situation at the start of the battle changes depending on whether you approach the enemy from behind, get snuck up on by the enemy yourself, or strike them with your sword.

—If your Brave Attack is a success, you will start the battle with an additional Brave Point.

—If you cut down grass, you may find an item.

Troubadour
Supports the party through the power of poetry.
An assist job that protects the party’s status. With a number of total effect skills on hand, the Troubadour is a reliable ally against strong enemies.

Beastmaster
A shortstop that employs various monsters.
The Beastmaster captures and employs its prey. From offense to relief, it can fight flexibly according to the situation.

Gambler
Leaves it to luck to turn the tables.
A gambling job unafraid to take a risk. With luck on its side, the Gambler aims for a big return.

Berserker
Pulverizes enemies with its trusty axe.
An attacker that wields an axe with high attack power to demolish its enemies.

Red Mage
An all-purpose mage prominent in both offense and defense.
This universal mage job can use both attack magic and recovery magic.

Hunter
Analyzes the enemy to pierce their weak point.
A master of the bow, the Hunter unleashes powerful blows that pierce the enemy’s weak point.

Shield Master
The party’s iron fortress that stands on the front line.
A defense-specialized job that wards off attacks and protects its allies with high defense power and a large shield.

Pictomancer
An artist that repaints the battle.
A job that debuffs the enemy through by utilizing various colors.

The Bravely series’ familiar “Single-Player RPG You Can Play With Everyone” element returns. In Bravely Default II, you can utilize the time the game is in sleep mode to help grow your characters.

“Search”: Take Advantage of the Time You Are Unable to Play

“Search” mode, in which you rent a boat to explore the seas, is a handy feature that allows you to earn rewards based on the amount of time your game is in sleep mode. By “searching” when you are unable to play, you can obtain items that assist your growth, including experience points and job points. While you can use this feature offline, if you are connected to the internet, players from other worlds will help you and further increase your rewards.

—You can start “Search” mode by visiting the elderly woman who rents boat in the starting country.

—Your rewards will increase based on the amount of time your game is asleep. You can continue to “search” for up to 12 hours, so make the most of your time when you go to bed or go out.

Bravely Default II is scheduled to release on February 26, 2021