Canvaleon hitting the Wii U eShop on June 18 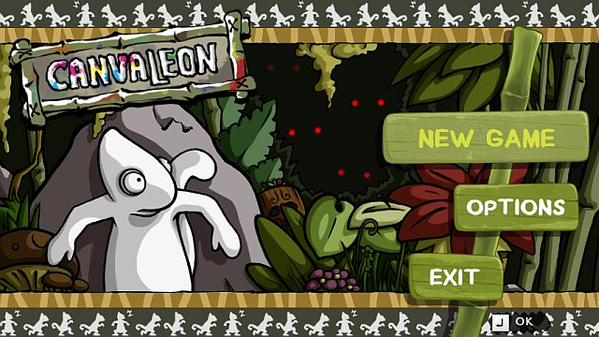 OXiAB Game Studio confirmed today that its Wii U game Canvaleon is coming to the eShop on June 18. That date should apply to both North America and Europe.

Canvaleon is a stealth platformer that has players using the environment and their skills to slip past enemies and threats. It’s possible to use “Camouflages” (or “Camo”) to mimic elements of scenery. The more similar the colors are, the more “Camo Percentage” will be granted. You’ll go undetected depending on the percentage.

Players can obtain camouflages in two ways. They can either purchase them from a store, or paint them using a paint tool. Both options require the game’s collectible: color butterflies.

As for the story, here’s a brief overview:

Canvas is the only white chameleon in a very particular chameleon village. Since he lacks the ability to change color by himself, he has been made fun of since birth. Also, his natural color stands out heavily compared with the environment, but he has managed to survive until now, thanks to the help of his only friend Doodle. Doodle (or “Dood” to his friends), being an artist himself, came up with the idea of using Canvas’ white body as a literal canvas for his paintings, making up Canvas’ lack of natural camouflage to some extent. But, to do so, Dood needs a lot of color butterflies, from with he extracts the pigments needed to create the camouflage for Canvas . So our adventure begins, with Canvas and Dood seeking the color butterflies in some ancient ruins near the village.
But the peaceful lives of the chameleons will change soon…

Check out a trailer for Canvaleon below.