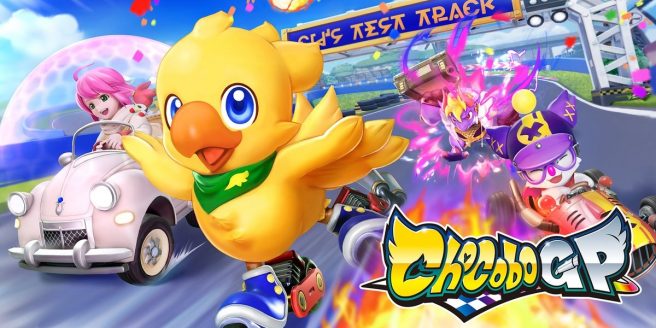 A number of improvements and changes are planned. Additionally, a number of characters are seeing adjustments.

The full patch notes for the Chocobo GP version 1.2.0 update are as follows:

1. Improvements to an issue where the race start timing is sometimes not in sync.
2. Improvements to an issue in Chocobo GP Mode and online play where the position at the end of a race and the effects do not match.
3. Changes to the Chocobo GP Mode so that no points are gained if the player did not finish the course within the time limit.
4. Adjustments so that less time is taken until the next matchmaking starts.
5. Addition of five new series.
– Each series is unlocked by achieving 3rd place or higher in the previous series.
6. The following changes were made to the character selection menu:
– Changed so that the settings for each character are retained.
– Changed so that the characters only take a pose when selected.
7. Changed victory voice when the player steps up onto the podium in 1st place during the podium cutscene.
8. Added a “Start Over” option in the pause menu during Story Mode.
9. Added the voice cast of characters added with each series to the “Copyrights” section in Options.
10. The following character capabilities have been adjusted:
・It has been made easier for the following characters to fill their ability gauge:
– Atla
– Camilla
– Sylph
– Vivi
– Gilgamesh
・It has been made harder for the following characters to fill their ability gauge:
– Mecha Chocobo
– Cactuar
・Improved boost effect when using abilities:
– Atla
– Shirma
– Sylph
– Shiva
– Vivi
・Changed so that they are not affected by blasts from their own abilities:
– Terra
– Cid
・Miscellaneous:
– Camilla’s Pa: Extended the invincible state when using ability.
– Maduin: Adjusted so that it is slightly easier to steer when using ability.
– Ifrit: Improved autorun correction when using ability.
– Cactuar: Changed so that Clair does not become a target while Clair is using his ability.
– Kwackeys: Changed so that they do not become invincible when the bomb is detonated, adjusted so that the blast radius and effect time are reduced.
11. Improvements to an issue where the Crystal Gauge effects are not shown under specific circumstances.
12. Improvements to an issue where the rocket start effects sometimes appear differently.
13. Improvements to an issue where a specific series of commands cause you to go off the course in Monster Village.
14. Other improvements and bug fixes.