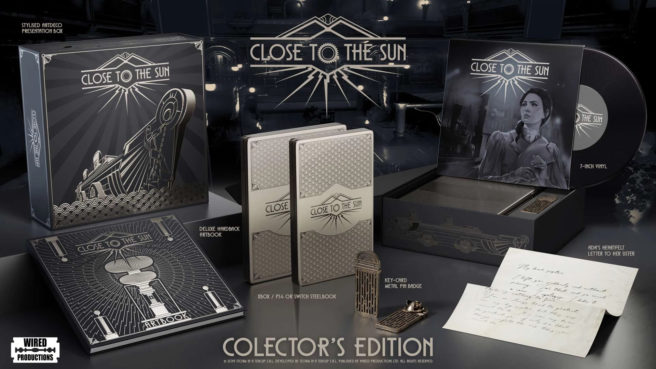 The teslapunk adventure horror title Close to the Sun will arrive for Switch on October 29, publisher Wired Productions and developer Storm in a Teacup have revealed.

Also announced today is a limited collector’s edition, which can be pre-ordered on the Wired Productions Store here. Only 1,000 pieces will be produced.

The following items are included:

Here’s an overview of Close to the Sun, along with a trailer:

It’s 1897. Deep in international waters, the Helios stands still. Dark clouds loom overhead as unforgiving waves crash against the hull. Colossal effigies of gold, decorated with magnificent finery, stretch as far as the eye can see.

Born of Nikola Tesla’s vision, the Helios serves as a haven for the greatest scientific minds. An unbound utopia for research, independent from state and isolated from the gaze of society. Free to push the boundaries of matter and time.

Journalist Rose Archer steps aboard the Helios in search of her sister Ada. She quickly discovers not all is as it seems. Grand halls stand empty. The stench of rotting flesh lingers in the air. Silence. A single word is painted across the entrance… QUARANTINE!

Experience a second era of scientific enlightenment, where the mind and inventions of the great Nikola Tesla have shaped the 19th century

Step aboard the Helios – Explore the colossal and mysterious vessel of scientific discovery, a safe haven for scientific progress, away from the threat of corporate espionage

Use your wits to guide Rose on her journey to find her sister Ada, overcome dangers unknown to understand the fate of the Helios and its inhabitants

More: Close to the Sun, Storm In a Teacup, Wired Productions