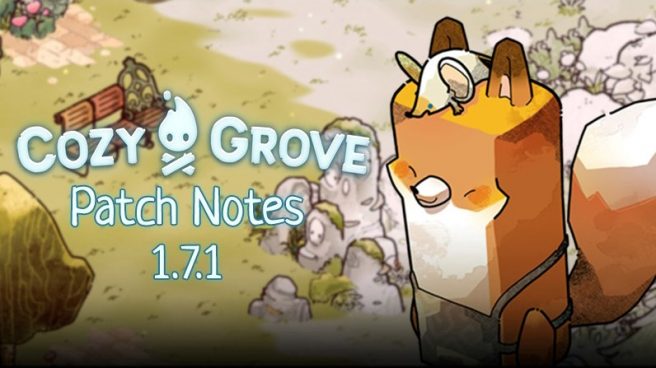 Cozy Grove has been updated on Switch once again. With version 1.7.1, the team has implemented quest rebalancing, bug and localization fixes, and general quality of life improvements.

– Higher-rarity lamps now have proportionately larger light radius to compensate for higher cost
– You can now properly donate mid-level gems and in doing so unlock recipes for highest tier gems
– Add the ability to specify which items a quest consumes when the quest can consume multiple different items from your inventory
– Fixes for some non-English text display issues, including Arabic
– Merge multiple shipments from Allison into a single letter
– Reduce the quantity of onions required by onion salads
– Rarer fish categories are a tad easier to catch
– Smaller fish nibble fewer times
– Added dedicated volume slider for UI sounds
– Added text note that trees and berry bushes make wood, to help new users
– Fix some visual bugs with imps
– Added variety to camp tiles
– Round prices per item before multiplying by quantity (instead of after)
– Added normals for prettier lighting
– Remove old deleted inbox messages that increase save file size unnecessarily
– Prevent fish spawning far away, by the dark sunken island areas
– Some quests from Lee Berry can no longer be fulfilled with fence posts
– Improved sorting of stacked & split items
– Unlock both heartbroken imps and the Scoutmaster letter referring to them on day 20
– Fixed Charlotte’s sunflower quest so you cannot donate the found flower
– Descriptions of high tier rocks and shrubs now include a helpful message if you are missing the right tool
– Added loading tip encouraging people to plant more trees and bushes
– New dirt pile art
– Fix bug where pro dowsing rod quest can show up too early
– Various bug fixes for the new quest turn-in UI functionality (lettering you choose what you want to give to the bear)
– Reduce price of backpack expansions
– When you have no new story quests, other quests have a chance to give you a Spirit Log
– Fix for Wary Bear quest that some players were softlocked on
– Imps will no longer steal bushes
– Fix for the ‘collect all’ button not working in the mailbox
– Tutorial triggered by player scaring fish will trigger less often
– Prevent clothing storage upgrade from appearing in store if closet size has already been maxed out (the max closest size will be increased in a future update)

Cozy Grove is available for Switch via the eShop.