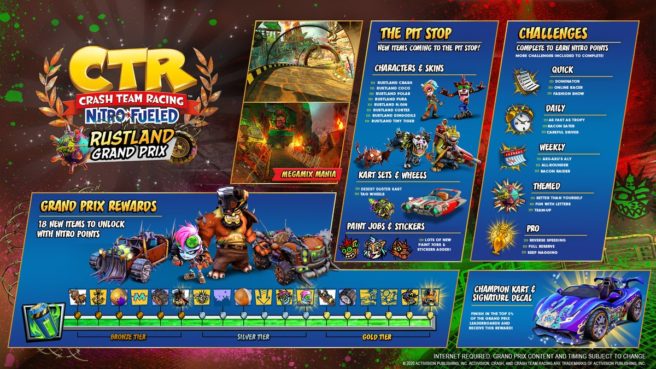 The Rustland Grand Prix includes a new track, Mega-Mix as a new character, new karts, and more. Additional information can be found below.

Outrun your opponents in this post-apocalyptic wasteland, where chaos reigns and only the boldest racers earn the spoils! Unlock new skins and karts to gear up for your rumble through an intense new track. Plus, fill your Nitro Gauge to earn a monstrous new character who’s fit for the setting. Lastly, fans might recognize Crash holding a special trophy this Grand Prix. In celebration of winning the Best Racing game at the 2019 Game Awards, Crash is showing off his newly acquired hardware on the title screen in game.

See more specifics below about the Rustland Grand Prix:

NEW CHARACTER: It’s alive!! And it’s ready to race. Unlock Crash’s greatest mistake, Mega-Mix! A dastardly mutant combination of Dr. Neo Cortex, N. Gin, Tiny Tiger, and Dingodile, this character from Crash Bandicoot history is tailor made to give the competition the heebie-jeebies.

NEW TRACK: An outpost of steel, fire, graffiti, and heavy metal is all that remains in the arid landscape. It’s Mega-Mix Mania, and it’s a track that’s sure to make your hair stand on end!

NEW KARTS: Your ride is everything in this wasteland, so make sure it’s up to the task. Unlock three new karts this season to amp things up on the track.

PIT STOP ITEMS: Intimidation is half the battle, so gear up with the new customization items available to unlock in this Grand Prix! Rock an industrial-punk style with Rustland skins, paint-jobs and stickers. Then, tag your kart with spray-paint decals and wheels.

CHAMPION KART AND DECAL: Finish in the top 5% of the Grand Prix leaderboards and win the Champion Kart and Rustland signature decal!

Here’s a video for the upcoming event: