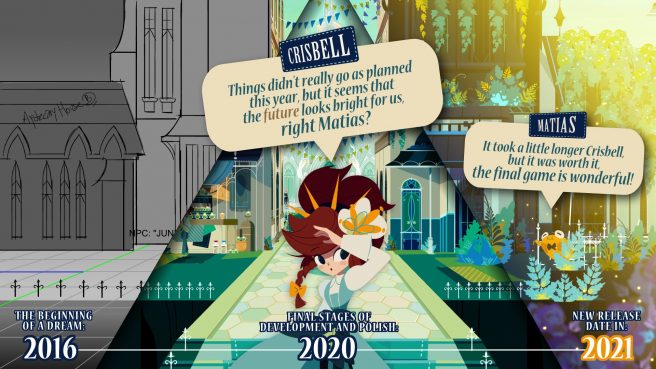 The RPG Cris Tales won’t be releasing in November as originally planned. Modus Games, Dreams Uncorporated, and SYCK have announced that the game is being pushed back to early 2021.

Here’s an official statement about the delay and why the extra time is needed, along with a gameplay trailer:

A message from Carlos Rocha Silva, CEO of Dreams Uncorporated and SYCK, the developers of Cris Tales.

To every Cris Tales fan, thank you for the interest in our game. We began development in 2014 and we hope it’s more than clear to all of you that this is a labor of love for us. Much of the team here became friends by believing in what we thought might be an impossible dream – the dream to create a video game that is both an homage to the golden age of JRPGs and also a completely innovative experience within the genre. We never believed that Cris Tales would reach an audience so big and diverse, and that people were going to love the dream and game as much as we do.

That is why we want to tell everyone who is eager for the release of Cris Tales that along with Modus Games we have made the difficult decision of postponing the release date of Cris Tales from November 17, 2020 to sometime in early 2021.

We are a very small video game development studio located in the city of Bucaramanga, Colombia. Cris Tales is the biggest project we have ever worked on, and we want to get it right. As you probably know, most areas and people in the game must be created at least three times, if not more to show the different past, present and futures. So, in a way, it’s like developing three different video games at the same time. Three video games that must be impeccable so that we can deliver all the magic we have in our soul to all of you. We want to make sure to earn all the love you’ve all shown in our events, demos, previews and so much more.

With the release of the demo for consoles, we have seen some of you give us feedback on some fronts that we also want to address, and we want Crisbell’s adventure to be narrated in the best possible way, so we hope you take this extra time as the time we need to polish the experience we’re sure you will all love and cherish.

What challenges will Crisbell and her teammates face? What battles will change time in the kingdom of Cristallys? Will the wrath of the Time Empress rule the world? We want you to enjoy finding all the answers that the Cris Tales universe is going to offer you.

We’re sure you all have a lot of questions, and we truly do consider you a part of the team on this journey, so a few members from the development team will be joining me for an AMA on Reddit on Friday at 12pm PT / 7pm GMT. Please accompany us while we continue creating this experience for all of you (and maybe get a sneak peek at some more of what we’ve been working on).

Thanks for believing in our Time Mages.

Sincerely,
Carlos Rocha Silva, the Devs at Dreams Uncorporated, and the SYCK Team

We’ll share the new release date for Cris Tales as soon as we have it.