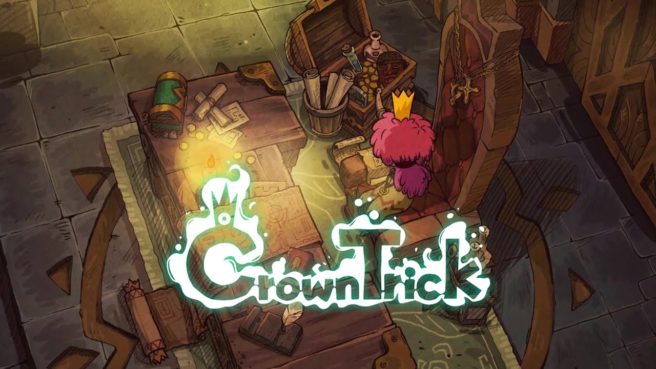 Team17 and Next Studios have dated the animated roguelike RPG adventure game Crown Trick. It’ll be available on October 16, it’s been announced.

Here’s an overview of Crown Trick plus a new trailer:

Redefining the roguelike genre with synchronous turn-based combat in which monsters and traps only execute their moves as the player does, Crown Trick’s gameplay demands each turn is well planned to help players succeed. The game features procedurally generated dungeons so that no two runs are ever the same as enemies, puzzles, and abilities will vary with each attempt to escape the Nightmare Realm.

Waking up in the Nightmare Realm as Elle and armed with only a magical, talking crown to guide them, players develop their own unique combat style, choosing between active and passive abilities, items, and relics to suit. Mastering dominion over elements will also be a key pillar to survival, and upon vanquishing the high-level familiars found lurking in the Nightmare Realm, players will steal their skills and wield them as their own in their journey to escape.

Crown Trick key features:
• Engaging strategic gameplay: Monsters and traps move only when the player moves; carefully thought out strategies are key to escaping the labyrinthine dungeon
• Fight how you want: Create and develop a unique combat style with dozens of active and passive skills and abilities, items, and relics help create different ways to cut through enemy encounters
• Learn from enemies: Gather elite ‘Familiar’ skills by overcoming enemies ready to unleash on others deeper in the dungeon
• Different dungeons every time: The procedurally generated maze ensures players have unique experiences every time they enter the Nightmare Realm

Crown Trick will be distributed for Switch as an eShop download.