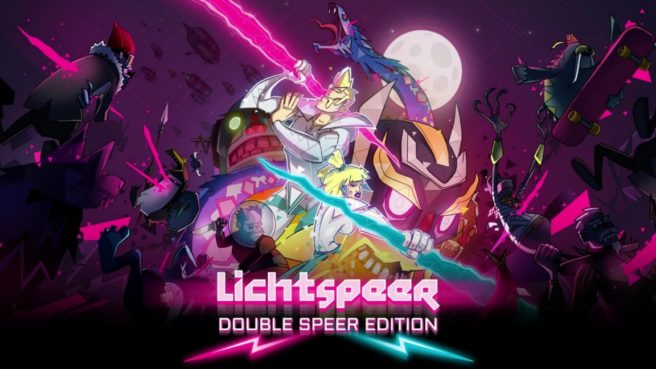 Crunching Koalas has two new games lined up for Switch. The studio will be bringing Lichtspeer: Double Speer Edition and Butcher to Nintendo’s console at some point in the future.

Lichtspeer describes itself as “an unforgiving fast-paced lightspear-throwing simulator set in an ancient germanic future.” On Switch, a new and exclusive co-op mode has been added in.

Butcher was previously released on other platforms, similar to Lichtspeer. The tough 2D shooter has players taking on enemies and defeating them in all sorts of ways.

We’ve included overviews and trailers for Lichtspeer and Butcher below.

In a land filled with Penguin Vikings, Wurst Zombies, and Hipster Ice Giants, survival is an art. Fortunately, an ancient champion with an elegant weapon has been summoned to please the gods and restore balance to the universe.

Grab your lightspear, become a Germonaut and traverse through lands straight out of Germanic myths. Survive with style and expand your powers to fight for the glory and amusement of the almighty Gods.

ThUNDEROUS TEAMWORK
Fight for the glory, hand-in-hand with your four-legged friend in a Nintendo Switch exclusive co-op mode.

WUNDER BOSS BATTLES
Battle a diverse legion of gargantuan wunder bosses – exploit their weaknesses and smash them into pieces!

AN ANCIENT GERMANIC FUTURE IS HERE
Discover the lands of an ancient Germanic future and fight a horde of Biedermeier beasts from another dimensions – Wurst Zombies, Evil Spacedwarfs, Skater Walruses, you name it.

SHOW OFF YOUR LICHTMAISTER SKILLS
Decapitate your enemies with headshots, execute special attacks, and generate zuper massive combos to improve your score and impress your friends!

BOMBASTIC SOUNDTRACK
Rave to a bombastic space soundtrack by Marcin Sonnenberg, from electro space marches to the vibrating sounds of tecnocumbia.

Butcher is a fast-paced 2D shooter and a blood-soaked love letter to the cult classics of the genre.

As a cyborg programmed to eradicate the last remnants of humanity, your sole purpose is to… well… annihiliate anything that moves.

So grab your weapon of choice (from chainsaws to shotguns, to grenade launches) and kill your way through underground hideouts, post-apocalyptic cities, jungles, and more. And if you’re feeling creative, there are plenty of other ways to end your enemies’ misery – hooks, lava pits, saws… no death will ever be the same again.

If kicking corpses into a lava pit and adorning walls with blood is your idea of a good time, Butcher is the game for you.

The easiest mode is ‘HARD’!