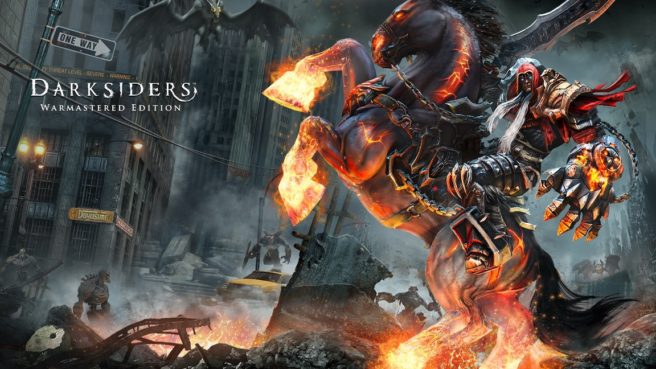 After it was initially leaked yesterday, THQ Nordic has officially announced Darksiders Warmastered Edition for Switch. The game will launch on April 2, the company confirmed today.

Here’s an introduction to Darksiders:

Deceived by the forces of evil into prematurely bringing about the end of the world, War – the first Horseman of the Apocalypse – stands accused of breaking the sacred law by inciting a war between Heaven and Hell. In the slaughter that ensued, the demonic forces defeated the heavenly hosts and laid claim to the Earth.

– Apocalyptic Power – Unleash the wrath of War, combining brutal attacks and supernatural abilities to decimate all who stand in your way
– Extreme Arsenal – Wield a devastating arsenal of angelic, demonic and Earthly weapons; and blaze a trail of destruction atop Ruin, War’s fiery phantom steed
– Epic Quest – Battle across the wastelands and demon-infested dungeons of the decimated Earth in your quest for vengeance and redemption
– Character Progression – Uncover powerful ancient relics, upgrade your weapons, unlock new abilities, and customize your gameplay style
– Battle Heaven And Hell – Battle against all who stand in your way – from war-weary angelic forces to Hell’s hideous demon hordes