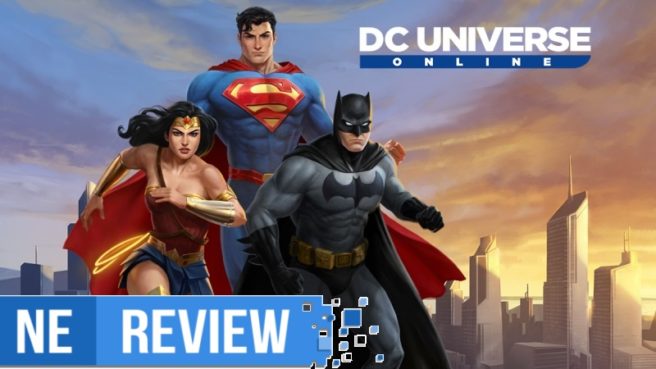 I would confidently place a meaty bet on the proposal that you, the reader, have definitely envisioned your own ideal superhero at some stage of your life. It’s one of those things we all do, and it’s always been a solid proposal for a video game. Daybreak, developers of Everquest and H1Z1, saw the potential of this idea, and in partnership with DC they crafted an MMO that brings this concept to fruition. As an opening statement to DC Universe Online, its character creator is an absolute treat. I used the bevy of available options, powers and weapons to create a flying, fire-wielding Neo knock-off named “Ultra-Dad”, but I could have made anything, really. A quick search of YouTube will offer up guides on how to create all manner of Marvel and DC heroes within the toolset, and just about the only thing that has to differ from existing properties is your character’s name (for some reason I couldn’t pick “The Incredible Father” for instance).

My time with DC Universe Online actually stretches back to 2013, well beyond the launch of Daybreak’s Switch port. I was originally hooked in by the PS4 version during its youth, a wholly different beast compared to the experience we have in our hands today. Make no mistake, eight years into its life this game is a remarkably content-rich MMO for new and returning players, and some may find that intimidating. Thankfully, the game always has something for you to work towards either alone or by teaming up with other players – even if you’re not spending any money. Back on PS4, I was able to play the entirety of the base game without dropping so much as a single red cent, and I never even felt the slightest compulsion to spend real dollars. Now, things have changed, and there’s a $15 monthly membership that is regularly flaunted as a necessity for anyone who might be considering a long term commitment. Back at the beginning of the decade, this might have been an easier sell, but considering that a lot of major MMOs these days are a one-off purchase, a recurring payment is a harder pill to swallow. Despite the presence of a subscription model, I can safely say that you can still experience an awful lot of game within DC Universe Online even if you decide against spending any money. Missions, alerts, PVP events – there is plenty to see and do within Gotham City and Metropolis on a budget. 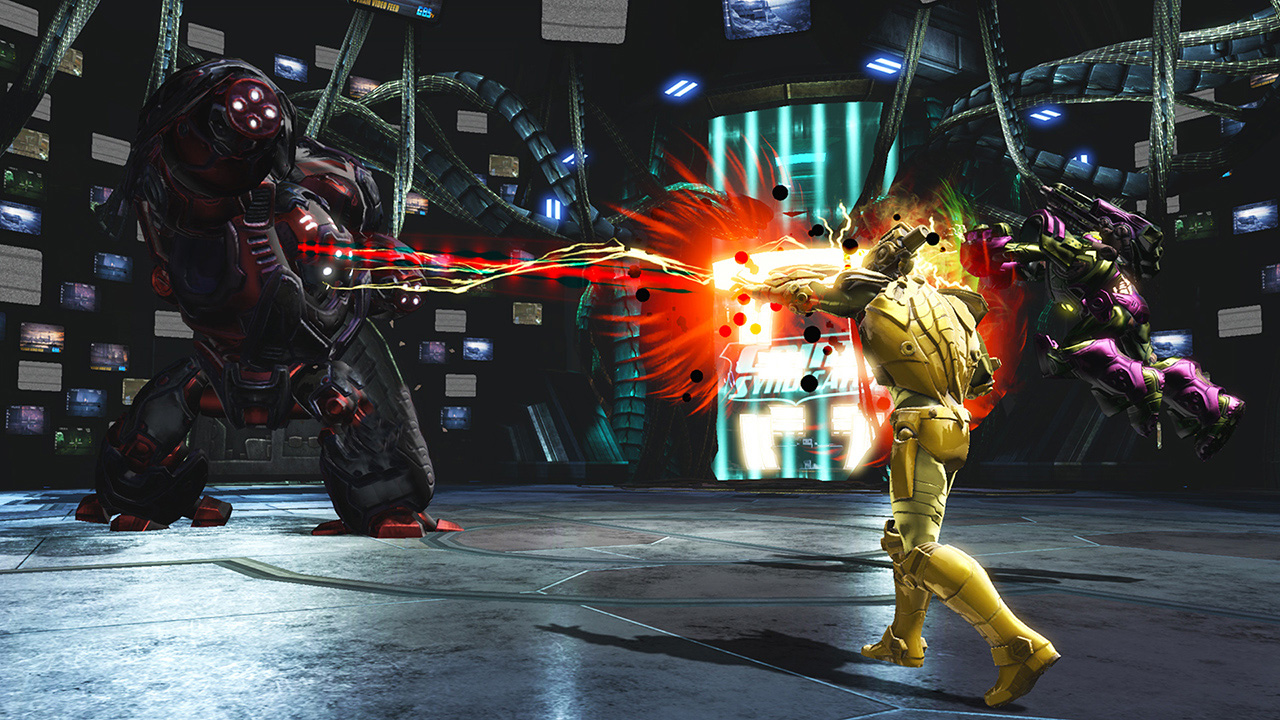 Technically speaking, DC Universe Online holds up incredibly well on Switch. Make no mistake, this is a last-gen looking MMO, but its transition to a handheld screen feels oddly fitting. Performance is good, and any frame rate dips I experienced were never severe enough to hamper the combat or exploration. The onscreen HUD could be an issue for some players – it’s absolutely tiny – but even my mole-man eyesight never stopped me from keeping up on vital information. Even though the game looks more suited to the PS3 or 360 (even down to its UI), the art direction has a certain campy charm to it. It really nails the 90’s and 00’s comic book aesthetic, which as a jaded twenty-something year old, I can totally get on board with. Often times I found myself flying my hero, Ultra-Dad, up to the rooftops of Gotham City for a moment of sober reflection, and peering out across the grungy cityscape was always a sight to behold thanks to some impressive visual effects and a higher-than-average draw distance.

Melancholic reflection aside, all true heroes know that sometimes you’ve just gotta bust some heads, and DC Universe Online’s combat system is totally up to that task. Whilst the combat might not be as kinetic and meaty as a single-player RPG, for an MMO that’s almost a decade old it feels far more satisfying than it has any right to. You can easily tell that combat has always been a key focus throughout the development. All of your weapons and abilities are conveniently mapped into digestible presets, allowing you to tailor your approach on the fly with relative ease. My abomination Ultra-Dad wields a variety of different fire attacks, both long and short range, along with dual swords, and despite being able to execute about thirteen different attacks at given time, the control mapping makes perfect sense, and I never feel overwhelmed. It’s PC to console done absolutely right. 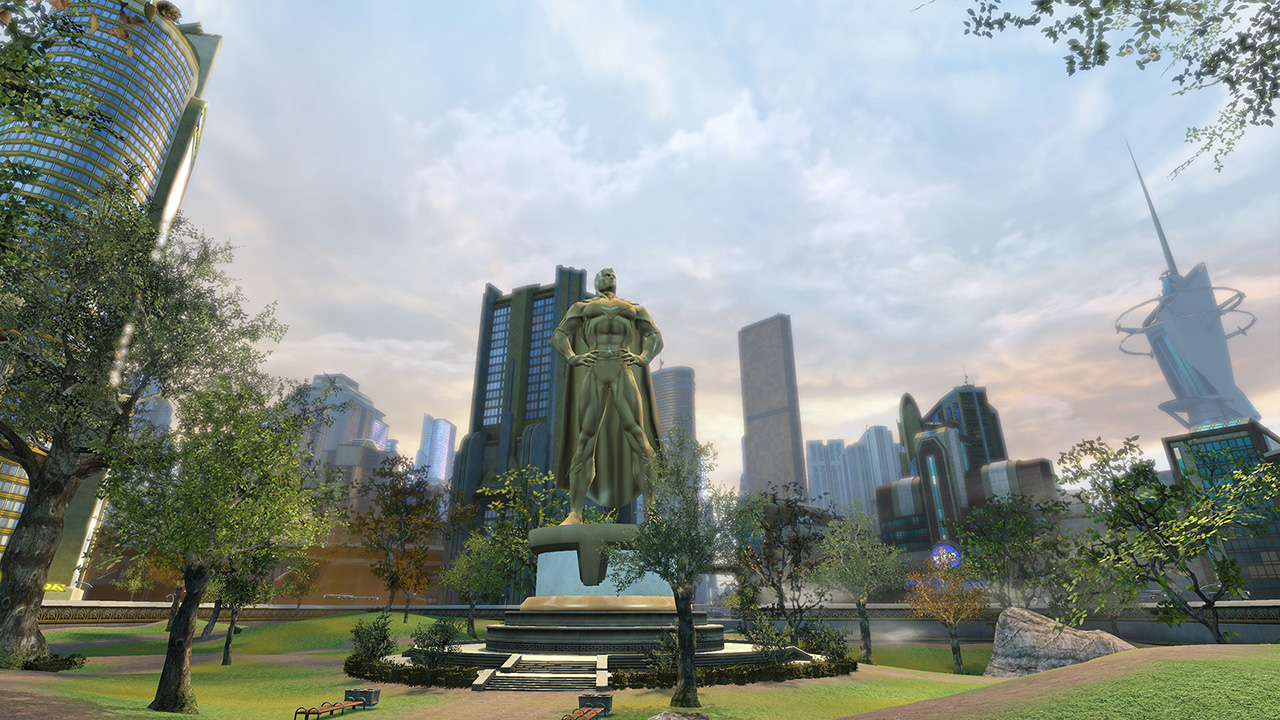 Your progression through typically comes in the form of quests that you receive from notable denizens of the DC Universe, and they normally consist of around two or three separate missions (sometimes more, sometimes less). At the end of each mission you receive a piece of armor and a solid chunk of XP, serving as your main source of growth as a character. Decommissioning enemies also nets you XP, but the amount gained is miserly compared to completing quests. Some may find the overall pattern of questing a little repetitive, as each assignment usually follows a very similar overall pattern, but thanks once again to the excellent combat and varied art, I never felt like I was wading through mud for the purpose of leveling up. There are also some really authentic animated cutscenes at the end of a lot of these quests that either close out the involvement of a significant villain, or set up the arrival of the next big threat. It was fun at level 1, and its still fun at level 30. Aside from regular quests, there are timed events and co-operative raids that you can queue up for as you play and these can net you significantly more useful gear and consumables depending on your co-ordination as a team. They’re tough, but extremely gratifying. I usually ended each session with the game by attempting one of these events, and the excitement that came with them was a satisfying exclamation mark at the end of an evening’s play.

One area that DC Universe Online could improve on is the way in which it communicates some of its systems. Early on in the game I was procuring all manner of currencies, crafting materials and consumables without so much as an iota as to what their purpose was. I did eventually receive a run through around utilizing most of them in the form of quests (and I could just as easily have visited the expansive wiki for more info) but for MMO newcomers on Switch, that may be experiencing this type of game for the first time, it feels needlessly dense in the early game. It’s certainly not a game-breaking issue, as the clarity comes eventually, but a slightly friendlier approach would have been welcome.

Depending on your level of affiliation with the DC pantheon, you’re either already playing DC Universe Online on Switch, or you took one look at the 24.1GB file size and went “Holy file-compression, Batman!”. For those of you who are still on the fence, I implore you to give the title a try. It’s a big game, sure, but there’s a reason for that – content. Eight years is no small stint in the MMO world, and DC Universe Online has a ton of content for you to work through as you “THWACK!” and “BAMP!” your way up the DC food chain. If you do decide to partake in a spot of heroism or villainy and you end you up crossing paths with Ultra-Dad, give him a wave and invite him to your next raid. He doesn’t get out much.

DC Universe Online review copy provided by Daybreak Game Company for the purposes of this review.