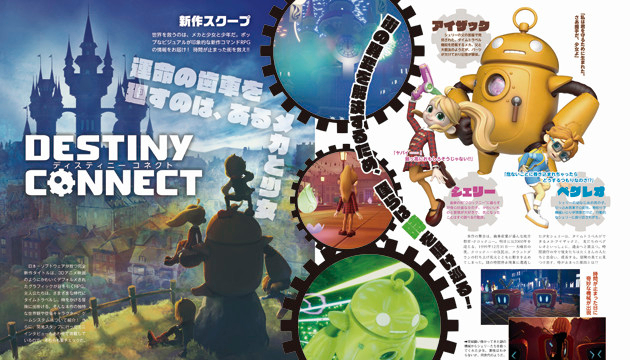 The recently announced Nippon Ichi Software RPG Destiny Connect created a teaser website to build anticipation for the game. In addition, pre-orders are live at several Japanese retailers and they include new information about the game. Here’s what they reveal courtesy of a translation by Gematsu:

To you, who was once a child, and you, who will one day find someone precious.

Destiny Connect is a completely new RPG in development at Nippon Ichi Software.

The Twon of Clocknee and its People, Depicted in 3D Graphics

The graphics are full 3D. The goal was a sense of beauty and comfort only possible with deformed graphics. Players will control characters and explore Clocknee, a town with a nostalgic atmosphere, while advancing the story.

A Story of the Past, Future, and a Growing Cast of Characters

Isaac is a robot that travels with Sherry and company. Players can power up his abilities by setting components called gears. Additionally, by changing forms, Isaac’s battle style will drastically change, so choose a form based on the enemy’s disposition and exhibit Isaac’s power to your heart’s content.