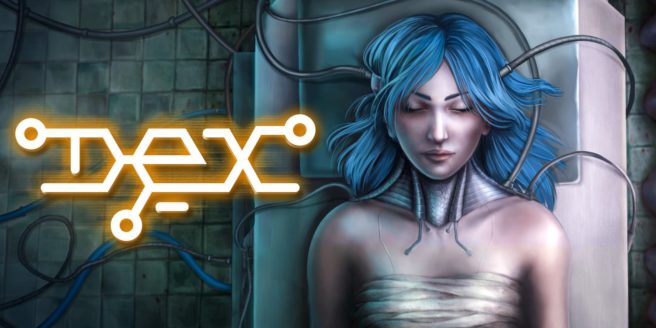 Dex is a game we covered way back in the day. The story-driven action/stealth side-scrolling RPG was funded on Kickstarter, with a Wii U version included. Although it’s probably safe to say that we won’t be seeing Dex on Nintendo’s older console, it will be getting a release on Switch – and very soon at that.

A listing on the eShop reveals that Dex is making its way to Switch on July 24. QubicGames will be publishing on behalf of developer Dreadlocks.

Here’s some information about Dex as well as a trailer:

You play as the mysterious blue-haired girl named Dex who is being hunted by a powerful and enigmatic organization for her unique abilities. Explore the misty, futuristic streets of Harbor Prime in this open-world dystopia. Unearth plots and intrigues, forge alliances and take the fight to your enemies on your quest to take down the system!

The world of Dex is designed as a tribute to some of the greatest neo-noir and cyberpunk worlds with a mature storyline, murky atmosphere and distinct characters. Gameplay is a throwback to classic 2D platforming and action games but mixed with deep RPG elements, interactive dialogues and real-time combat.

Customize your character’s skills and equipment to match your desired playstyle – kill from shadows as a silent assassin, fight the power head on as a gunfighter, use persuasion like a sly diplomat or fight from a distance in cyberspace as a hacker. Blur the line between being human and “cyborg” by installing augmentations that grant you superhuman abilities and open up new paths in Harbour Prime like classic Metroidvania titles.

– Deep RPG mechanics mixed with side-scrolling 2D action
– Non-linear gameplay set in a cyberpunk open-world
– Intriguing and mature plot in a neo-noir atmosphere
– Multiple dialogue choices with branching outcomes
– Full English voice over
– Multiple playstyles – stealth, open combat, diplomat, hacker or a mix of the above
– Various customization options – choose your equipment, skills and even cybernetic implant skills to open up new paths in the city
– Unique hacking mechanic that lets you dive into Cyberspace