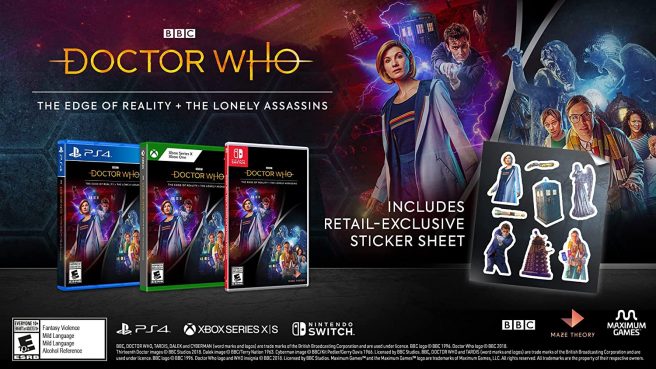 Doctor Who: Duo Bundle will be sold at retail as a new Switch physical release, it’s been revealed.

The package contains Doctor Who: The Edge of Reality – Deluxe Edition and Doctor Who: The Lonely Assassins, both of which were previously added to the eShop. Fans will also be provided with an exclusive sticker sheet.

Information about both titles can be found below.

Doctor Who: The Edge of Reality

Wield the sonic screwdriver as you join the Thirteenth Doctor (voiced by Jodie Whittaker) on a quest to save the universe, and meet the Tenth Doctor along the way (voiced by David Tennant in a guest appearance).

Experience an unforgettable adventure through space and time, face terrifying monsters and solve a mind-bending mystery!

Enter the Chaosverse, where reality itself is threatened by a series of time-breaking glitches, and partner with two formidable Doctors as you seek to uncover a deeper mystery.

Doctor Who: The Lonely Assassins

Doctor Who: Duo Bundle is currently listed for an October 18, 2022 release. You can pre-order a copy on Amazon here.

Nintendo Everything is a participant in the Walmart affiliate program. The website may receive a partial commission through orders placed with this retailer.