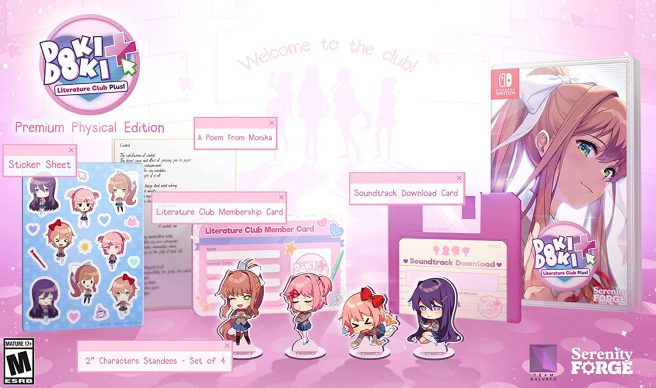 The physical version of Doki Doki Literature Club Plus has been delayed again. Serenity Forge passed along the news on Twitter, indicating that the release has been impacted by the current pandemic.

Doki Doki Literature Club Plus was originally planned to hit retail on August 31. It was then delayed to September 21. Serenity Forge says that its “partners have confirmed with us that there will be no further delays in the physical release.”

Below is the company’s full statement on Doki Doki Literature Club Plus’ physical version:

Our teams have been working tirelessly with partners across the globe to bring the DDLC Plus premium physical editions to you. Over the course of the past year and a half, however, the pandemic has presented our partners with many unique challenges.

The nature of these challenges has been unprecedented and has greatly impacted the gaming industry as a whole. Manufacturing limitations, material and labor shortages, and shipping delays have significantly affected the timeline and process involved with physical production.

Due to these continued logistical challenges our partners have been facing, the physical release will be delayed to October 8, 2021.

After assessing their production timelines our partners have confirmed with us that there will be no further delays in the physical release.

We want to sincerely thank you for your continued support as a community, both in your reception of the initial release of DDLC Plus, and in your enthusiasm for the upcoming physical edition.

We are as excited as you are to experience all the love that has been put into this physical edition when you receive it in just a few short weeks.

Doki Doki Literature Club Plus previously landed on the Switch eShop at the end of June. We interviewed creator Dan Salvato about the game, which you can find here.