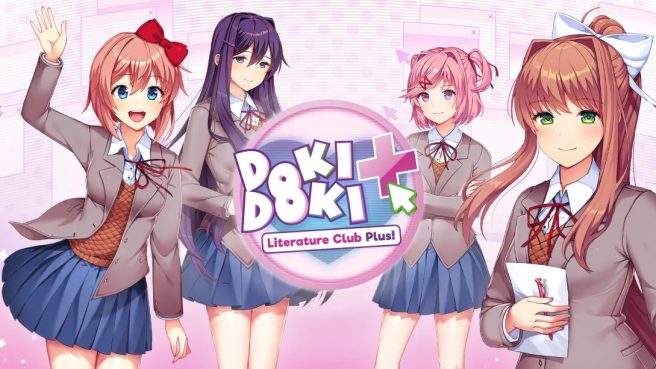 Four years after its original debut, Doki Doki Literature Club is back in the news with a new “Plus” version. Aside from incorporating new content and features, it just appeared on consoles for the very first time – including Switch.

We were recently about to speak with Doki Doki Literature Club creator Dan Salvato about the game as well as the new Plus version. That includes a little bit of talk about bringing the game to Switch.

Our full discussion is below:

One of the more consistent things you hear about Doki Doki Literature Club is that despite what you see on the surface through screenshots, you’re left with an emotional horror rollercoaster that really takes you by surprise. Were there other inspirations from horror visual novels that helped the game to where it is today, or did this come from a different place entirely?

I think the inspirations for the horror atmosphere of DDLC aren’t from other visual novels, but from games and other media that left me with a feeling that I wanted to express in DDLC. More important to me than “horror” is the feeling of uncanny – the feeling that you don’t belong, or that you’re not in control, or that your reality is distorted in some way. Two inspirations I commonly cite are Yume Nikki and Eversion, despite those games being totally different from DDLC.

Was Doki Doki Literature Club initially going to have a darker aesthetic because of its narrative tone or was the intention to always have a dichotomy between the art direction and story?

The dichotomy was always intended as one of the main points of the game. More important than the tone of the gameplay was the incorporation of my understanding of Western anime culture – everyone, whether or not they’re into anime, loves poking fun at the tropes we often see in dating sims, and anime in general. I wanted DDLC to invite players to not take it seriously, and then use that mindset against them by forcing them to rethink their relationship with fiction.

The game initially came out years ago and saw much fan acclaim. What prompted wanting to come back and explore the world of DDLC deeper and expand it further?

DDLC is very much about the characters. The characters demonstrate very real, relatable insecurities and personal struggles that many players strongly identify with. I really wanted to write the Side Stories as a way of expanding upon those themes and having the characters further explore their interpersonal relationships in ways that the original game didn’t allow. To me, fiction is a type of communication, and it can communicate emotions and messages that we don’t normally get to express to others. Through the Literature Club members, I think there are many people who feel more strongly connected to each other, and that can be a strong element of support for whatever we may be going through in life.

When did the new Plus version begin to come together? Can you say how long the project has been in the works?

Well, different things happened at different times, so it’s hard to say exactly how long the game took to develop in total. But we started work on the DDLC Plus content as early as 2019. It feels amazing to finally be able to share it with the world.

Just in general terms, what has the process been like of bringing Doki Doki Literature Club to consoles? Were there any challenges involved?

From a technical standpoint, the game essentially had to be recreated from the ground up – it was very meticulous and painstaking to get everything right. As for game content, since PC and console platforms are fundamentally different, we had to keep that in mind as well. The creative challenges inspired some really cool new content in DDLC Plus that I’m excited for everyone to discover.

We know Doki Doki Literature Club Plus will be releasing on all platforms, but the Switch – and handhelds in general – has always been such a great place to experience a visual novel, especially with artwork being such a massive focus on the experience aside from the writing. What was it like working with the system to get the best visual fidelity possible for both its handheld and docked modes?

The original DDLC game was made for 720p resolution, which is fine for handheld mode, but it doesn’t cut it for everyone playing on a big screen. So as part of bringing DDLC to Switch and other consoles, the visuals were upgraded to full 1080p resolution. For a small team like us, it was a major undertaking to revisit the source materials and render 1080p versions of all the artwork, and some bits and pieces of it even had to be redrawn (but it’s so accurate that you’d never notice!). But the end result is that the game is an absolute pleasure to play in both handheld and docked mode on Switch.

How did you come about adding new side stories to the game and what can fans expect in that area?

As mentioned previously, the Side Stories were my opportunity to elaborate on the characters’ interpersonal relationships. In the Side Stories, the club members face very real challenges that they must overcome in order to become close friends with each other. Working through communication issues, coping with negative emotions, reflecting on oneself – these are things not all of us are taught growing up, and I think that players can learn more about themselves by seeing others face these common challenges. It’s all very wholesome, and the Side Stories share a core theme with DDLC: There’s no magic formula to win in friendship, love and life, but we are always able to do our best for ourselves and each other.

You’re working with Serenity Forge on this new release. How did the partnership happen?

Serenity Forge intimately understands the nuance required when working with DDLC. In areas like the game design, marketing, and the physical packaging, we needed to break all kinds of conventions in order to realize our vision. I think many larger publishers would have slammed on the brakes in response to some of our more wild ideas, but Serenity Forge embraced them. In addition, Serenity Forge has an incredible in-house development team, and DDLC Plus would not have been possible without their highly dedicated support of the project. It’s for these reasons that we chose Serenity Forge as our publisher.

With millions of downloads to date since the release of Doki Doki Literature Club, despite being free, what was the decision to opt for the accessible price of entry both digitally and physically?

This was a tough one, because we really had to ask ourselves what players are paying for when purchasing DDLC Plus. Are they paying for the privilege of playing DDLC, a free game, on their favorite console? We don’t agree with that. The $15 is the cost of the additional content and HD visuals. I think you really get a ton of amazing stuff for $15, but we believe in keeping the entry barrier low so that we can share our stories with more people. We hold a strong relationship with our players and want to ensure they’re supporting us because they’re happy to do so, not just because they want our content.

Speaking of physical, how did the boxed version for consoles come to be? What went into choosing the different goodies that would be included?

For the box goodies, we had to start with the specifications for what can fit in a Switch game case. From there, we brainstormed content that we felt matched all these criteria: It has a quality feel, it’s cost-effective, and it’s something that DDLC fans would love. You can tell we put pretty much all of our good ideas into the box!

What has the journey of Doki Doki Literature Club been like for you personally? It must have been a wild ride developing the game, launching it to a huge fan response, and now even making a new version for consoles with a physical version in stores.

When DDLC was released, my life changed very, very quickly. I’m a tinkerer who spends most of my time in solitude, and all of a sudden, I was the public face of an enormously popular brand. There were (and still are) a ton of new challenges for me to face, like coping with mental health struggles and working effectively as part of a larger team. But the growth has enabled us to continue doing what we do best – making cool stuff for people to enjoy—for a long time to come. It’s so weird because I just feel like a normal person, but then Nintendo is tweeting about my game and things like that. It really reminds me that there are normal human beings behind all the things that are most meaningful to us. I think I have a whole lifetime of personal fulfillment and gratitude for having been able to touch so many hearts with my work, and it inspires me to continue making a positive impact in the ways I can.

Since Doki Doki Literature Club came out in 2017, we have to ask: is there anything you can share about what’s next for Team Salvato?

All I can say is that we’re all super excited to dive deeper into some of our cool new ideas! Thank you for believing in us.

Doki Doki Literature Club is out now on the Switch eShop. A physical version will follow on August 31.