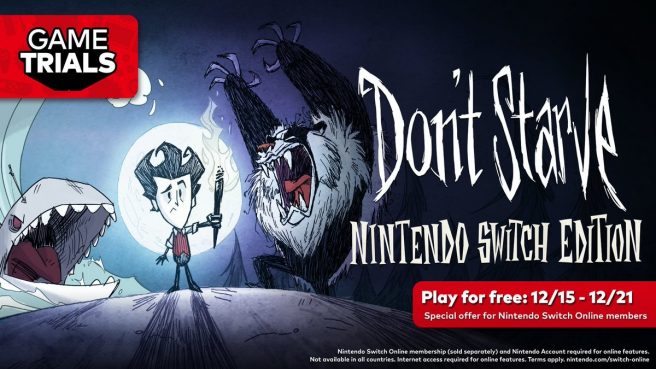 Don’t Starve: Nintendo Switch Edition will be the next Switch Online Game Trial, it’s been announced. Those with an active subscription can play the title entirely for free starting next week. And like all Game Trials, all progress can be transferred to the full version.

North America’s last Switch Online Game Trial was The World Ends with You: Final Remix, which was offered during the middle of November. Over in Europe, the region is about to kick off a new trial for Art of Balance. Sometimes these demos are the same across regions, but it looks like that won’t be the case this time around.

Here’s some information about Don’t Starve:

In Don’t Starve: Nintendo Switch Edition, You play as Wilson, an intrepid Gentleman Scientist who has been trapped by a demon and transported to a mysterious wilderness world. Enter a bizarre and unexplored world full of strange creatures, dangers, and surprises. Learn to exploit the environment and its inhabitants to escape and find your way back home.

If you’re ready for a new challenge, Reign of Giants expands the entire world of Don’t Starve with new characters, seasons, creatures, biomes, and other challenges to Don’t Starve.

If you’re looking for adventures at sea, Shipwrecked will set you off to explore a mysterious new tropical archipelago that you can explore on both land and sea! Don’t let the tropical breeze lull you into a false sense of security – the world might be different, but it is still equal parts unforgiving and uncompromising.

Do whatever it takes to survive, but most importantly, Don’t Starve!