Double Kick Heroes due out on Switch in August 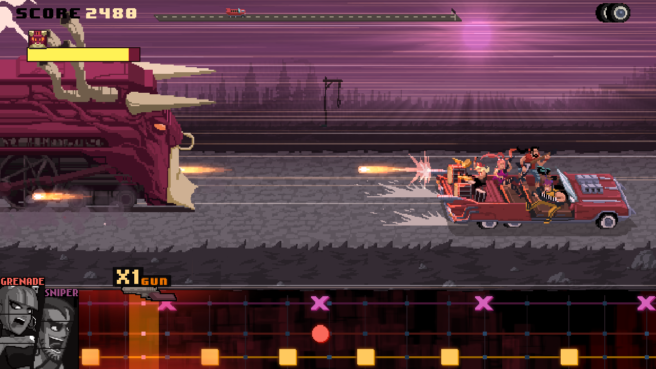 Double Kick Heroes, which was first announced for Switch in January 2019 and was expected last summer, has finally secured a release date. Headbang Club announced today that the rhythm shooter mashup will launch via the eShop on August 13. Pre-orders go live on August 5.

Here’s an overview of Double Kick Heroes, along with a trailer:

It’s time to jump out of the mosh-pit and into your Gundillac, Sheila, and take on the baddest of badasses and survive in this metal moshing and mayhemic post-apocalyptic nightmarish wasteland.

– A full story mode that’s accompanied by 50 kerranging songs, including the OST Volume 2 Update, by top artists such as Ultra Vomit, Volkorx, Gorod, Jinjer, Carpenter Brut and Gojira!
– Unique Rhythm shooter mashup with incredibly detailed pixel art
– 5 difficulty settings to test even the most metal of metal head’s skills
– Tons of accessibility options
– Nintendo Switch Joy-Con Alternative Motion Control Methods
– Air drumming – Joy-Con used as drumsticks, keeping in the rhythm of the game
– Air beat – Can’t drum? No Problem! Stomp to the beat with your Joy-Con
– Want the all-out motion-controlled experience and really put that double kick pedal to the metal? Then it’s time to use two sets of Joy-Con, one in your socks and one in your hands and drum and stomp your way through the apocalypse!