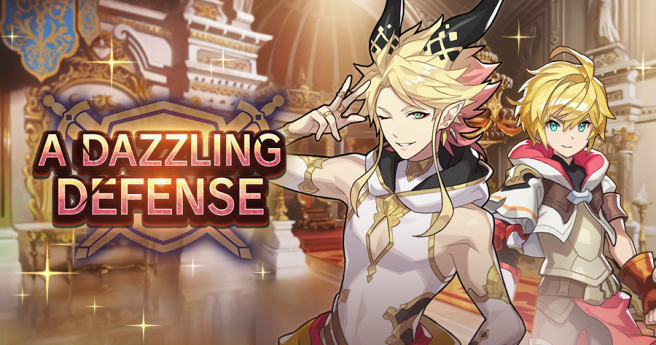 Dragalia Lost has dropped its newest onslaught event, A Dazzling Defense. This event has players battle against hoards of enemies which get more difficult every level.

Defeating all of these foes and defending an area gives out a special Victory Reward (including flame tomes and light tomes). Also exclusive to the A Dazzling Defense event, Astral Tartarus Assault is available as an EX quest when on Master difficulty.

A Gala Dragalia Remix is also coming soon, and a trailer has dropped for it. Check it out below as well as specifics about the event.

If the user is hit by an attack that can be
avoided with the damage immunity provided
by skills while using this skill but before
it applies Overcharged, this skill will instead
apply four levels of Overcharged to the target
and nearby enemies.

(Light) Team Strength Amp = Curse Res +100%
If a team member is attuned to Light:
reduces their susceptibility to curses by 100%
when they have a team strength amp.
Benefits your whole team.

When shapeshifting for the first time,
the user will transform into Jupiter regardless
of what dragon they are equipped with.
The second time onwards, they will transform
into High Jupiter instead.

Also, when the user dodges an enemy’s attack,
applies “Overcharged” to the attacking enemy
and grants the user a strength amp with a
maximum team amp level of one.
After activating, this effect will not activate
again for 10 seconds.

Overcharged has four levels and deals damage
to the affected target and nearby enemies when
the effect is lost. This damage and its area of
effect increase with its level, and when removed
at level four, it also inflicts paralysis and stun.

Arc Absorption II
Fills the dragon gauge by 20% and restores the
user’s HP if they are in range of the attack dealt
by the “Overcharged” effect when it is lost.

Shapeshifting Boost VIII
Adds 10% to the modifier applied to damage
when in dragon form, and extends shapeshift
time by 20%. Benefits your whole team.

(Light) Shapeshift = HP Regen VI
If a team member is attuned to Light:
each shapeshift grants them an HP regen buff
for 20 seconds. Benefits your whole team.

Sacred Shield II
Reduces susceptibility to poison
and curses by 100%.

Draconic Charge II
Fills 50% of the user’s dragon gauge when
their HP drops to 30% (once per quest).

(Flame) Strength +60%
If the user is attuned to Flame:
increases strength by 60%.

(Flame) Uriel’s Favor II
If the user is attuned to Flame:
grants the “Uriel’s Zeal” effect when they
dodge an attack.