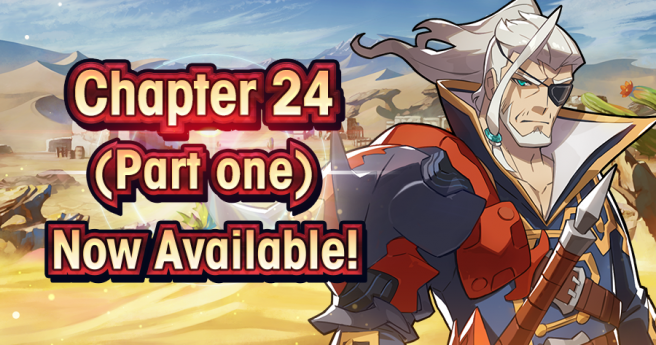 A couple of summoning showcases and a story event have gone live in Dragalia Lost. To start, Part One of Chapter 24: Primal Strength has been added to the main campaign, which allows players to explore the fallen land of Lefkos. Players must investigate the graveyard of the Primordial Dragons and find the truth of Lefko’s destruction.

More info about these adventurers and their specific stats can be read below.

Get a closer look at some of the 5★ adventurers and a 5★ dragon eligible to appear in the Wind Focus summon showcase below.
5★ adventurers:

(Wind) Above 10 Hits = Water Res +10%
If a team member is attuned to Wind:
reduces water damage taken by them by 10%
when the combo count is 10 or higher.
Benefits your whole team.

Michael’s Covenant II
At the start of quests, inflicts the “Locked Sigil”
debuff on the user for 300 seconds and grants the
user a unique force strike that deals damage to
multiple targets and enemies near those targets
and has three charge levels. The number of
enemies this force strike targets increases based
on how many levels are charged.Also, creates a combat zone around the user
and grants the user one of two combat styles:
close quarters or ranged. If there are any
enemies within this combat zone, the user will
engage in close-quarters combat, otherwise they
will default to ranged combat. The user’s standard
attack patterns and the effects activated by their
first and second skills will change based on their
combat style.Locked Sigil’s remaining time will be reduced
by 15 seconds for every 25-hit combo.
After activating, this effect will not activate again
for eight seconds.

15 Hits = Overdamage
For every 15-hit combo, grants overdamage
based on 30% of the user’s strength. This
effect will not stack, and is removed when
the combo counter resets.

(Wind) Combo = Critical Rate V
If a team member is attuned to Wind:
increases their critical rate by 1%
for every 10-hit combo. This effect can
stack up to 20 times, but all stacks will
be lost when the combo counter resets.
Benefits your whole team.

Flurry Devastation +13%
Increases critical rate by 13% when
the combo count is 15 or higher.

・The stats shown here do not include increases or decreases due to abilities and represent the adventurers at level 80 with 50 mana nodes unlocked, not the stats when first obtained.
・Some skills have different effects when used as a shared skill.
5★ dragon:

Primal Tempest
Deals wind damage to surrounding enemies,
and lowers their wind resistance by 10%
for the remainder of the quest.
This resistance reduction will not stack.

(Wind) Flurry Skill +70%
If the user is attuned to Wind:
increases attack skill damage by 70% when
the combo count is 15 or higher.