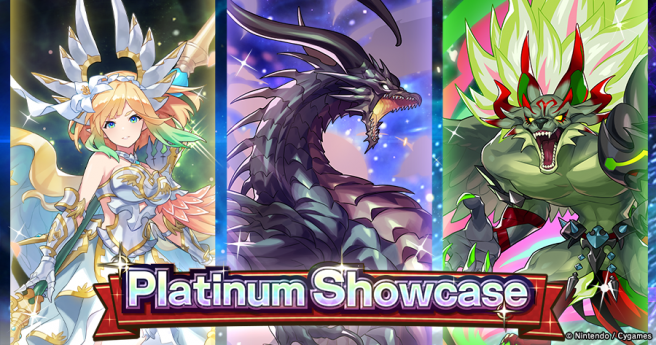 The Gala Dragalia is running at the same time as this Platinum Showcase, but it only lasts until November 4, 2021. This event will include some new adventurers that can be summoned at an initial appearance rate of 6%. These newly included adventurers include 5 star Halloween Laxi (light/rapid-fire manacaster), 5 star Halloween Sylas (shadow/bow), and the dragon 5 star Gala Chronos Nyx (light).

Specifics about these new adventurers can be seen below.

(Light) Combo = Critical Rate V
If a team member is attuned to Light:
increases their critical rate by 1%
for every 10-hit combo. This effect can
stack up to 20 times, but all stacks will
be lost when the combo counter resets.
Benefits your whole team.

Clockwork Creature II
Grants the user a clockwork gauge that is
completely filled at the start of quests.

After the clockwork gauge is completely filled,
it will be gradually depleted during force strikes,
but will grant the user the following effects until
it is completely depleted:

After the clockwork gauge is depleted, it will
gradually fill automatically, and the user will not
be able to use force strikes until it is filled.

Flashburn Frenzy II
Extends the window between hitting an enemy
and the combo counter resetting by 0.5 seconds.

Also, increases the user’s chances of inflicting
flashburn by 25% for every 15-hit combo (up to
three times per combo), and grants the user a
stack of the “Flashburn Trickster” effect each
time they inflict flashburn (up to three times per
combo). Flashburn Trickster increases damage
to flashburned enemies by 7%. These buffs are
removed when the combo counter resets.

Surgical Trick
Shareable
7
Deals damage to enemies in a line,
inflicts poison, and dispels one buff
from each target.

If this skill is used while the user has a Combo
Sample, a Strike Sample, and a Dash Sample,
all three effects will be consumed, and the user
will carry out an additional attack that deals
damage to the target and nearby enemies,
dispels one buff from each of them, and inflicts
shadowblight.

Aromatic Treat
Applies one of the following at random to
each member of the entire team:

Also, occasionally grants all of the above
bonuses at the same time and removes
all afflictions.

If this skill is used while the user has a
Combo Sample, a Strike Sample, and a
Dash Sample, it grants all of the above
bonuses and removes all afflictions,
but consumes all three effects.

(Shadow) HP Below 60% = HP Regen VI
If a team member is attuned to Shadow:
grants them an HP regen buff for 20 seconds
when their HP drops to 60%. After activating,
this ability will not activate again for 30 seconds.
Benefits your whole team.

When the user has all three of these effects,
their first and second skills will be powered up.
Using one of these powered-up skills will
consume all three effects.

In addition, increases the user’s strength
by 30% when their HP is 70% or above.

・20% is added to the modifier applied to damage
against light-attuned enemies for 30 seconds.
This increase will not stack.
・The user is granted a defense amp with a
maximum team amp level of two. After this amp
is granted, this ability will not grant it again for
10 seconds.
・The skill gauges for the user’s first and second
skills are filled by 15%. After activating, this
effect will not activate again for 10 seconds.

Also, dispelling an enemy buff or barrier applies
adaptive suppression that lowers the modifier
applied to the target’s affected damage by 15%
for 10 seconds. This debuff will not stack.

Dimensional Oblivion
Deals damage to the target and nearby enemies.
Damage: 500 × 7 hits

Time’s Transcendence II
Grants the user a dragon strike while
shapeshifted as Chronos Nyx. This dragon
strike deals damage to the target and has
three increasingly powerful charge levels.