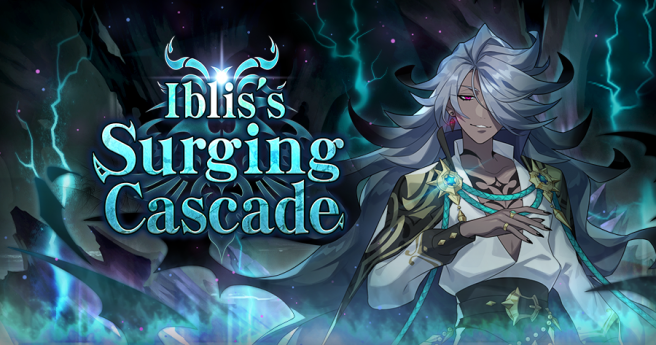 Iblis’s Surging Cascade has been added to the Rise of the Sinister Dominion in Dragalia Lost, bringing new wyrmprints and weapons slots. Also, teams can use the Team Change mechanic in this event, which all0ws players to prepare 2 teams with specific elemental abilities that can be used when the boss switches their elemental attunement mid-battle.

A prize showcase is also live now, featuring the two adventurers 5 star Cecile (wind/rapid-fire manacaster) and 5 star Civilian Leif (light/sword). This event will be live until September 2, 2021 and more information about the adventurers (including art and stats) can be seen below.

If this skill is used after the Manachew gauge
is completely filled, but before it is depleted,
a variant called Scatterfall will be used instead.
Scatterfall deals damage to the target and
nearby enemies and inflicts stormlash.

Munch on a Manachew
Fills the user’s Manachew gauge by 50%.

If this skill is used after the Manachew gauge
is completely filled, but before it is depleted,
a variant called Poisonblast will be used instead.
Poisonblast deals damage to enemies directly
ahead, inflicts poison, and grants the user a
strength amp.

(Wind) Stormlash = User Water Res +8%
If a team member is attuned to Wind:
reduces water damage taken by them by 8%
for 15 seconds when they successfully inflict
an enemy with stormlash. After activating, this
ability will not activate again for 10 seconds.
Benefits your whole team.

When the Manachew gauge is completely filled,
it will begin to gradually deplete automatically
and grant the user the following effects until it
is depleted:

Also, when shapeshifting, the Manachew
gauge will be filled by 50% when the user’s
shapeshift is undone.

Dodge Charge II
Fills 20% of the skill gauges for the user’s
first and second skills when the user dodges
an attack. After activating, this ability will not
activate again for 15 seconds.

(Light) HP Below 40% = Shield VI
If a team member is attuned to Light:
grants them a one-use shield that nullifies
damage up to 50% of their maximum HP
when their HP drops to 40%. This does not
stack with any other shields of the same type.
Benefits your whole team.

Pledge of Justice II
Grants the user a unique force strike that deals
two hits, the second of which inflicts bleeding,
and increases damage dealt by this force strike
by 20%. The user will be immune to knockback
while charging this force strike as well as when
executing it.