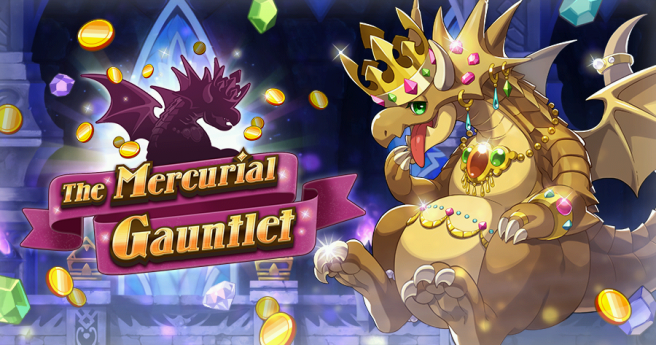 In addition to these additions, a Gala Dragalia Remix is now live as well. This summoning event features the new adventurers 5 star Basileus (wind/wand) and 5 star Sandalphon (water/staff) and brings back the adventurer 5 star Gala Elisanne (water/axe). The Gala Dragalia Remix will be live until October 17, 2021 at 10:59pm PT.

Specifics about the appearance rates of the adventurers included in the Gala Dragalia Remix and more info about The Mercurial Gauntlet can be found below.

The Mercurial Gauntlet features solo-only quests that can be played without expending stamina.

“Faf fee! (I’m Fafnir Roy III!)”
There is a mysterious dragon called Fafnir Roy III who rules over a great treasury and is searching for someone worthy of obtaining that fortune.
A dazzling mountain of treasure awaits those who can appease Fafnir Roy III. Enter the Mercurial Gauntlet to claim the prize!

■The Mercurial Gauntlet Overview
In this event quest, players will battle Fafnir Roy III, a dragon who lives in the Halidom’s treasury and loves treasure, to obtain rewards.
Quests of various elements up to level 20 will unlock at 06/19/2019 at 01:00.

Feeling confident in your skills? All the better! Challenge these quests to see which level you can reach!

■Rewards
There are two types of rewards in The Mercurial Gauntlet.

・Clear Rewards
These are rewards you can obtain by completing quests. They can only be obtained once per quest.

・The Victor’s Trove
These rewards can be claimed once per month.
The contents of The Victor’s Trove vary based on your combined level, which is the sum of the highest level you cleared for each of the elementally attuned quests.