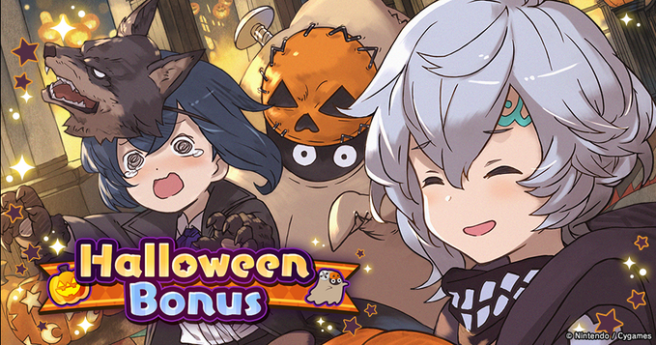 Dragalia Lost has released its newest content, this time adding the onslaught event, Postmortem Panic, an epilogue to Forgotten Truths, Halloween goodies for logging in, and a new Platinum Showcase and Dragon Special summoning showcase.

To start, the log-in bonus will give out rewards for the next seven days. These specific rewards will be:

Next up, both of the summoning showcase (Platinum and Dragon Special) are featuring Dragons to give players a better chance of summoning them. The dragons featured in both showcases are Konohana Sakuya, Gaibhne & Creidhne, and Ariel. These showcases will run until October 15, 2020 at 10:59pm PT.

The raid event Forgotten Truths has added an epilogue to dish out special rewards. This is a limited time addition and will be live until October 18, 2020 10:59pm PT.

Finally, the brand new Halloween event, Postmortem Panic, brings with it quests that will have players fight hoards of enemies. There will be special Victory Rewards for those who beat the assault and there are All-Out Assault quests for those who want a real challenge. This event will run until October 18, 2020 10:59pm PT and there is more information on its features below.

Postmortem Panic Event Details (all times listed are in CT)

We’ve barricaded ourselves in the castle, but I’m afraid many are beginning to lose hope. Fortunately, I have drawn up a quite brilliant plan!

■Event Overview
Postmortem Panic is an onslaught event where you must take on hordes of attacking enemies.

Enemy attacks will get fiercer with each increase in difficulty level. What’s more, dragon challenge battles and boss battles that pit you against massive fiends await in the All-Out Assault quests, which are the final quests for each difficulty level. If you succeed in defeating enemies and defending an area, you can obtain a special Victory Reward. Use your full might to repel the Dyrenell Empire’s invasion and win peace for New Alberia!

Additionally, in the Postmortem Panic event, we will add Astral High Mercury Assault as an EX quest for Master difficulty! Be sure to challenge this single-adventurer dragon battle that pits you against Astral High Mercury, a powerful foe said to be the equal of a high dragon!

■Rewards
In the Postmortem Panic event, you can get water tomes and wind tomes, which can unlock shared skills for water- and wind-attuned adventurers, as glory rewards.

■Story
In Postmortem Panic, you can enjoy a new story about allies fighting with all of their might to protect various areas. You can use the limited-time item, war chronicles, to read the story.
・The story for Postmortem Panic will be partially voiced instead of fully voiced in Japanese.

■Playing the Event
Postmortem Panic has multiple quests for each difficulty (beginner, standard, expert, and master).

At the start of an onslaught event, only one beginner quest will be unlocked. More quests can be unlocked using battle charts, items that are unique to the event. After clearing all of the quests for a difficulty, you will receive a Victory Reward and the next difficulty will be unlocked.
・To challenge the EX quest, you must collect battle charts to unlock the quest, then use a stratagem.
・Stratagems can be obtained from certain quests in the Postmortem Panic event, or as glory rewards, which are described below.

■Glory Rewards
Glory points are event-exclusive points that can be earned by clearing event quests. Collect them to earn all kinds of rewards! These rewards include limited-time items such as battle charts, stratagems, and war chronicles, which can be used to unlock quests and new stories in Postmortem Panic.
・You can get battle charts by clearing quests in the Postmortem Panic event and collecting glory. You cannot obtain battle charts as drop rewards.

■Castle Stories
A new castle story has been added under Castle. You can read castle stories by using looking glasses, which can be obtained as glory rewards.

■Dragon Battles
Dragon battles are solo quests unique to onslaught events where you remain shapeshifted for the entire duration of the quest.

The adventurer that you are controlling will automatically shapeshift at the start of the quest and their shapeshift will have an unlimited duration.

Unlike standard shapeshifting, you will take damage from enemy attacks. You will fail the quest if the HP for all of the adventurers in your team reaches zero.

Some dragon battles are limited to a single adventurer while others require four adventurers to participate. The rules vary slightly in both cases.

■Treasure Trade Rewards
You can earn primal crystals by playing event quests and trade them for various rewards on the Treasure Trade menu.

Notes:
1. You can see more details about Postmortem Panic by tapping Help on the event page.
2. Players must have completed up to Chapter 2 / 2-1 (Normal) of the main campaign to participate in event quests.
3. If the event ends while you are playing an event quest, the quest will continue until results have been determined, and you will be able to gain the rewards shown.
4. You will not be able to use primal crystals, battle charts, stratagems, or war chronicles obtained in this event in future events.