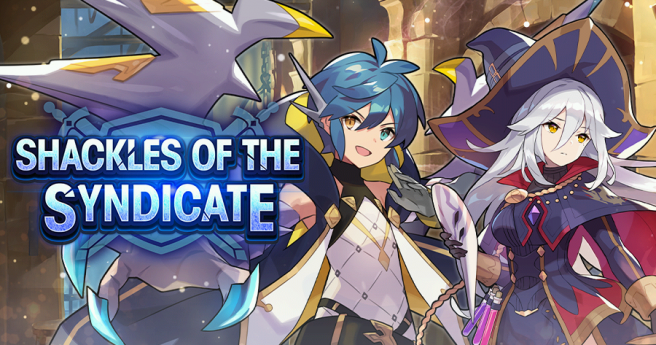 The defensive event Shackles of the Syndicate is live now in Dragalia Lost. This event has players defending a gate against hoards of enemies, and special Defensive Battle quests combine attacking and defending in one strategic mission. These battles are the highest difficulty for all the missions included in the event, and they give out rewards such as flame tomes and light tomes that can be used to unlock shared skills in  flame- and light-attuned adventurers.

There is also a log-in bonus running for the duration of this event, and the specific items given for each log-in are listed here. The Shackles of Syndicate event will last until September 20, 2021 at 10:59pm PT and more details about the story and specific rewards can be seen below.

■Event Overview
This is a limited-time event in which you must defend your gate while defeating hordes of attacking enemies. Enemy attacks will get fiercer with each increase in difficulty level. What’s more, in the Defensive Battle quests, which are the final quests for each difficulty level, you can enjoy battles that combine attacking and defending. In these quests, you must defend your gate while repelling enemies advancing from various routes. Use your full might to repel the walking dead and win peace for New Alberia!

■Rewards
You can get flame tomes and light tomes, which can be used to unlock the shared skills of flame- and light-attuned adventurers, as glory rewards in this event.

■Story
In this event, you can enjoy a new story about allies defending against enemies with all of their might. You can use the limited-time item, war chronicles, to read the story.

Note: War chronicles cannot be used to read the story outside of the event’s duration.

■Glory and Limited-Time Items
Glory points are event-exclusive points that can be earned by clearing event quests. Collect them to earn all kinds of rewards! These rewards include limited-time items (battle charts, stratagems, and war chronicles) that can be used to unlock event-exclusive quests and stories.

Battle charts can be obtained by collecting glory in this event. They cannot be obtained as drop rewards, as endeavor completion rewards, or from the Treasure Trade.

■Treasure Trade
You can earn primal crystals by playing event quests and trade them for various rewards on the Treasure Trade menu.

Defensive Battles are special quests where you are tasked with defending a gate from oncoming enemies. You can clear defensive battles by simply preventing the gate from being destroyed or by losing to the boss, but you will earn additional rewards if you defeat the boss. If the gate’s HP reaches zero or you are defeated before reaching the boss area, the quest will end in defeat.

■Enemy Routes in Defensive Battles
When a new group of enemies appears on the map, the route they take will be shown with arrows on the minimap. There are some difficulties in which enemy routes will not be displayed.

■Quest Skills
These are special skills that can be activated during certain quests. Once activated, their effects will originate at the location of the controlled adventurer. They can be used up to three times per quest and incur a cooldown upon use, during which they cannot be activated again. Quest skills may be unavailable in certain quests.

■Drawbridges in Defensive Battles
Some maps will have drawbridges placed on them. Such quests will begin with the drawbridges raised, stopping both enemies and allies from crossing them. By attacking a switch near a drawbridge, you will be able to lower and cross it. Once a drawbridge has been lowered, it cannot be raised again. Enemies will never attack drawbridge switches.

■Houses and Bandits in Defensive Battles
Some maps have houses on them. If a map has houses on it, bandits will prioritize attacking the houses over attacking your gate. If you can defeat the bandits before a house is destroyed, a ring of light will appear in front of it. Standing in these rings will give you useful benefits, such as making your adventurers stronger and revealing enemy locations on the minimap. Whether or not houses are destroyed will have no bearing on the rewards you receive at the end of a quest.

■Boss Enemies in Defensive Battles
If you defeat all of the enemy waves on a map, you will be able to advance to a new area where a boss enemy is waiting. The boss will not leave the boss area. By defeating the boss within the allocated time, you will receive additional rewards.

■Retrying in Defensive Battles
You can retry if your gate reaches 0 HP or if all adventurers in your team reach 0 HP before progressing to the boss area.