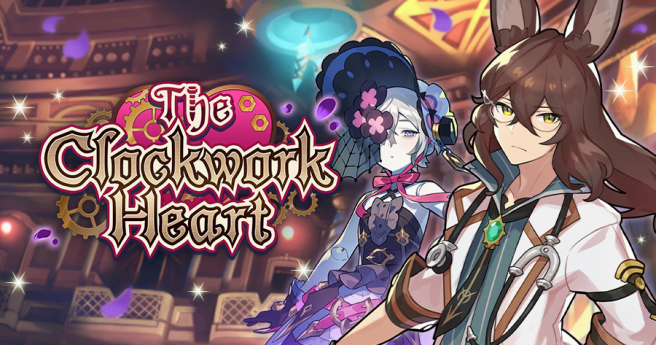 A new facility event has come to Dragalia Lost – The Clockwork Heart. This event brings with it the exclusive facility Dr. Schmidt’s lab.
Dr. Schmidt’s lab increases the stats of adventurers who are equipped with blades or staffs. It also boosts the damage done to enemies in event quests.

Dr. Schmidt’s lab can be upgraded with conductive bolts that are earned by equipping the event-specific wyrmprint A Halloween Spectacular! The wyrmprint Adventure in the Past can also be equipped for more acclaim when clearing quests.

Finally, the Halloween Bonus is live alongside this event, giving out special rewards for players logging in. These exact rewards are listed below:

Both the log in bonus and The Clockwork Heart will last until November 10, 2021 at 11pm PT. More specifics about the facility event can be found below.

■Upgrade Item: Conductive Bolts
You can get these items from the story quests and boss battles for this facility event.

■Boss Battles
Boss battles are quests where you can face off against boss enemies that appear in the event story. Rewards vary depending on the difficulty cleared. This quest can be played either solo or co-op.

These quests will have you testing your strength against waves of enemies. If you fail to reach the last wave in Expert or Master difficulty, you will still receive rewards for the ones you did clear, but in Nightmare difficulty you must complete the final wave to earn rewards.

■Trial Quests
You can play these high-difficulty quests in either solo or co-op. Trial quests will be available starting on 10/31/2021 at 01:00 and can be unlocked by progressing through event quests.

■Acclaim Rewards
Acclaim points are event-exclusive points that can be earned by clearing event quests. Collect them to earn all kinds of rewards!

■Event Bonus
The following wyrmprints will have bonus effects during this event.

・A Halloween Spectacular!
・Adventure in the Past

If you equip these wyrmprints and clear event quests, you’ll get even more conductive bolts and acclaim points.

You can get A Halloween Spectacular! from endeavor rewards. Adventure in the Past is available in the Treasure Trade for wyrmprints.
Note: The amount of event bonus effect differs based on the wyrmprint and how much the wyrmprint has been unbound.