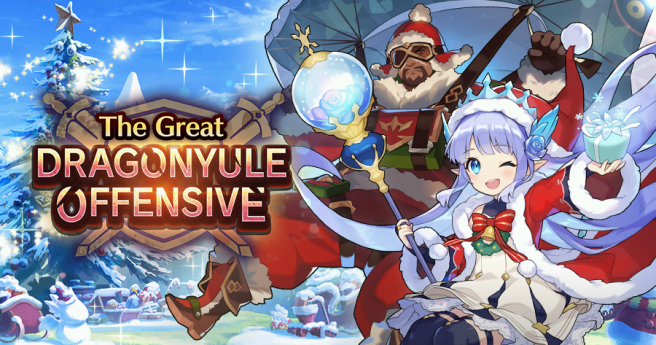 The onslaught event The Great Dragonyule Offensive is live now in Dragalia Lost. This event has players facing off against hoards of attacking enemies that become more fearsome as the difficulty increases. Master difficulty even includes Astral High Jupiter Assault as an EX quest, which pits players against the formidable foe Astral High Jupiter.

Rewards for completing these quests include water tomes and shadow tomes, as well as items that restore stamina as glory rewards. Additionally, players receive a special bonus for logging in during this event:

All of this will be available until the event ends on December 23, 2021 at 9:59pm PT. More specifics about the story and details of the event can be found below.

■Playing the Event
There are multiple quests for each difficulty (Beginner, Standard, Expert, and Master).

At the start of an onslaught event, only one Beginner quest will be unlocked. More quests can be unlocked using battle charts, items that are unique to the event. After clearing all of the quests for a difficulty, you will receive a Victory Reward and the next difficulty will be unlocked.

To challenge the EX quest, you must collect battle charts to unlock the quest, then use a stratagem. Stratagems can be obtained from certain quests in The Great Dragonyule Offensive event, or as glory rewards, which are described below.

■Glory Rewards
Glory points are event-exclusive points that can be earned by clearing event quests. Collect them to earn all kinds of rewards! These rewards include limited-time items (battle charts, stratagems, and war chronicles) that can be used to unlock quests and new stories in The Great Dragonyule Offensive.

■Castle Stories
You can read castle stories by using looking glasses, which can be obtained as glory rewards.

Note: No new castle stories will be added during this event.

■Dragon Battles
Dragon battles are solo quests unique to onslaught events where you remain shapeshifted for the entire duration of the quest.

The adventurer that you are controlling will automatically shapeshift at the start of the quest and their shapeshift will have an unlimited duration. Unlike standard shapeshifting, you will take damage from enemy attacks. You will fail the quest if the HP for all of the adventurers in your team reaches zero.

Normally, when an adventurer equipped with the dragon Gala Chronos Nyx shapeshifts and performs standard attacks, dragon strikes, skills, or the automatic dodge effect granted by his ability, their remaining shapeshift time will be depleted. However, in Dragon Battles, performing these actions will deplete their remaining HP instead.

■Treasure Trade Rewards
You can earn primal crystals by playing event quests and trade them for various rewards on the Treasure Trade menu.