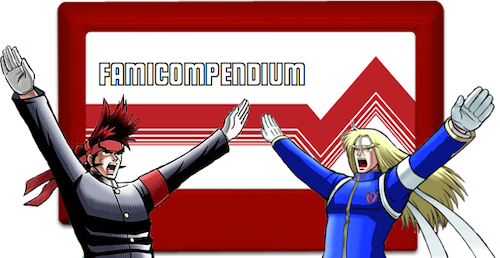 I hope you all like anime cheerleaders and J-pop, because this week I’m taking a look back at a pair (or is it a trio?) of quirky rhythm games produced by iNiS that are up there as personally my favourite games on the Nintendo DS. As a development team that takes a clear musical direction with each of their games (iNiS itself stands for Infinite Noise of the Inner Soul), they understand how to create a perfect blend of personality and compelling gameplay unlike anything else out there. Case in point: their 2005, Nintendo-published title – Osu! Tatakae! Ouendan (“Yeah! Fight! Cheer Squad”, if you were wondering why nobody ever translates its name) In an interview with 1UP, the game’s director Keiichi Yano stated that iNiS’s philosophy was to create games with “passion” – both in terms of the act of making the games and the actual content. Rather than making games as pure entertainment, he wants to create experiences that “make people feel good”. None of their games exemplify this approach quite as well as Ouendan because, really, who can express and incite passion quite like a good cheer squad?

The titular Ouendan are a specialized squad of cheerleaders who show up out of the blue to help drive ordinary (and a few extraordinary) citizens to succeed in their goals – whether that be taking a university entrance exam or fighting off a giant rat. With their goofy mix of ridiculous hairstyles, distinctive sideburns and massive eyebrows, the Ouendan are far from the usual American depiction of cheerleaders, but that’s part of the charm (and that’s not to say that the skirt-wearing, pom-pom-waving variation don’t show up). Each stage is its own self-contained story, beginning with a manga-style cutscene showing some stressed-out soul screaming for the Ouendan. The game has a reputation for how ridiculous the scenarios are, but that’s not strictly true. The Ouendan have to deal with plenty of seemingly mundane problems, like a kid trying to woo a girl by winning a game of dodgeball, but the way the game presents these rather trite dilemmas with the hot-blooded passion of a sh?nen manga never fails to be entertaining. 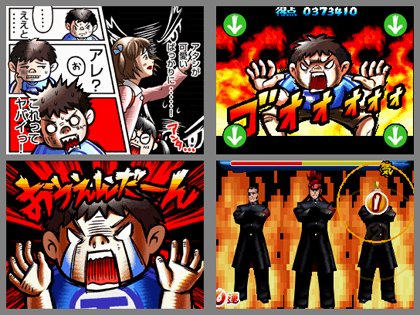 Unless anyone wants to bring up some forgotten Game.com title, I’m certain that Ouendan was the first rhythm game to rely entirely on using a touch screen for input. Apparently Yano had the idea for Ouendan when he first played the DS and the gameplay of tapping and dragging sequences of notes in time with the catchy J-pop playing in the background feels like a natural fit for the console. It’s incredibly simple, but the difficulty level gradually increases to the point where memorization and a keen sense of rhythm are required to succeed. This isn’t helped by the harsh scoring system where even being slightly offbeat can quickly drain the Ouendan’s life bar. On harder difficulty levels it’s entirely possible to fail a stage without actually missing a single note.

While the rhythm game is happening, the story doesn’t stop as the action on the top screen changes based on the Ouendan’s performance. The songs are broken up by short animated evaluations that show the progression of the plot. The direction of the cutscenes change depending on how well the Ouendan are cheering, potentially causing some downright hilarious outcomes and slight changes to the ending of the song. These segments provide some incentive to replay stages if the desire for an elusive “S” rank isn’t enough, but most importantly they’re just plain fun. The fact that the songs are accompanied by an over-the-top cacophony of whistles and cheers is also entertaining. The sound design is changed to a softer set of percussion for the game’s token sad song – although neither Ouendan game has anything that matches the hysterically overblown sentimentality of Elite Beat Agents’ “You’re the Inspiration” stage. 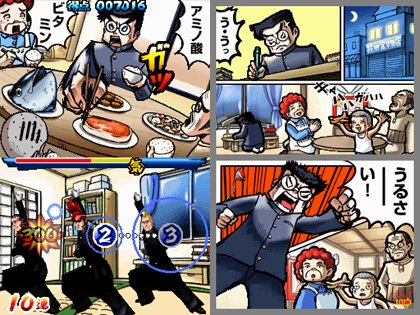 So Elite Beat Agents, as I’m sure many of you already know, was a completely overhauled version of Ouendan with a localization so comprehensive that it should be considered a completely different game. Though it was a popular title with importers, Nintendo thought that Ouendan was impossible to bring it to audiences outside of Japan in its current state. It’s not just the soundtrack that’s an issue, so much as the fact that the game as a whole is steeped in Japanese culture. On top of the bizarre appearance of the Ouendan, the games have stages based on foreign concepts like a mikoshi race at a summer festival, sumo wrestling, Japanese-style electoral campaign, plus a few stages based on fables that are downright nonsensical without knowing the story behind them. I mean, Elite Beat Agents sold poorly enough as it is, so I think totally changing the game for a different audience was the right decision.

If the Ouendan games are heavily reliant on Japanese culture, then Elite Beat Agents is definitely a microcosm of everything about the USA, albeit presented through the distorted lens of a Japanese game developer. The influence of American pop culture is most evident in the agents themselves, who were designed to be a combination of the Blues Brothers, Men in Black and Ghostbusters, with a bit of Charlie’s Angels thrown in there in the form of the agents’ commander. Though some of the stages are very similar to their Ouendan counterparts, the agent’s missions take them to popular US tourist spots like Hollywood, Las Vegas and the Leaning Tower of Pisa (hey, two out of three ain’t bad). While EBA keeps the same humorous yet passionate tone of the original game, some of the characters the agents help seem a bit more superficial and self-serving. It’s not really an issue of empathy (especially considering that the first Ouendan game had a stage where success involved beating Egyptian slaves), but it’s an attempt at lampooning American excess that falls a bit flat. Or maybe I’m just reading too far into a game where a baseball player fights a fire-breathing golem. 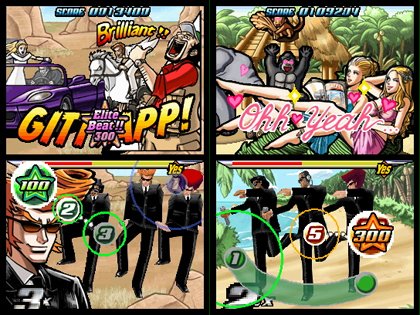 Elite Beat Agents is often criticized for its song choices, but it’s actually fairly faithful to the original game when it comes to the music used. I might know my Ry?k?ka from my Kay?kyoku, but I’m not exactly knowledgeable about what artists are hip and happening in the Japanese music scene. In fact, the only Ouendan song I was really familiar with before playing the games was the theme from ancient TV series, Monkey, which shows up in the second game for some reason. Apparently all the songs in both Ouendan games were all hits in Japan, so this idea of using well-known pop music from different generations carries over into Elite Beat Agents (even if Ashlee Simpson is now only a distant memory). Almost all of the tracks are covers, but they’re all decent and sometimes completely transform the original song (like switching the gender of the vocalists). There are rumours that the music in Elite Beat Agents was cherry-picked by Nintendo of America CEO, Reggie Fills-Aime himself, but it seems that it was actually chosen by members of iNiS as “the songs you would want to hear if you went to a college frat party.” I can’t exactly imagine Sk8er Boi being played at many college frat parties, but I also can’t picture Reggie as being a massive fan of Cher so who knows. 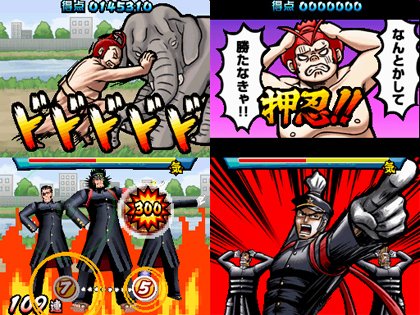 In 2007, iNiS revisited the series for the final time with a mouthful of a title – Moero! Nekketsu Rhythm Damashii: Osu! Tatakae! Ouendan 2 (“Let’s Go! Hot-Blooded Rhythm Spirit: Yeah! Fight! Cheer Squad 2”). Many of the improvements introduced in Elite Beat Agents, such as unlockable missions, use of the short-lived DS Rumble Pak and the ability to save replays were retained in this sequel and the agents themselves even make an appearance as downloadable characters. Heck, the game’s final stage is almost a carbon copy of EBA’s climactic “Jumpin’ Jack Flash” level – albeit far tougher and with more giant lasers made of pure hot-blooded energy reheating the sun. Ouendan 2 is easily the best of the bunch, with a more refined visual style, more interesting note patterns and some small features that were sadly absent in the original like the ability to skip intros and outros.

Ouendan 2 also introduces a rival cheer squad who are playable for around half of the game’s stages. Their missions don’t mix up the usual Ouendan gameplay at all, but it’s fun to control a new set of characters that come close to matching the original team’s absurdly flamboyant style. The game’s highest difficulty setting has also been tweaked a bit to be faster and more complex. There’s even an unlockable mode that multiplies your score but turns off the shrinking circles indicating the timing of the notes, making things insanely challenging. If Ouendan 2 has one issue, it’s that the “spinner” notes that require players to rapidly draw circles on the DS’s lower screen are still very much present. It’s definitely possible to S-rank every stage, but it may result in the destruction of the console’s touch screen, as I found out the hard way. 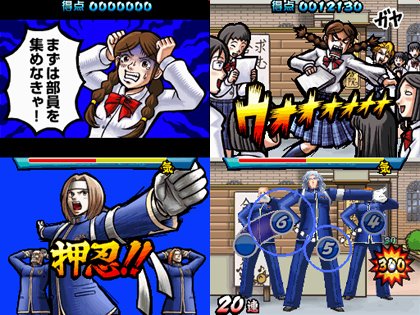 The Ouendan series might have been short-lived, but it certainly made an impact on the gaming industry. As a pioneer of touch-based rhythm gameplay, it influenced titles like Pentavision’s DJ Max Technika and Konami’s Utachi, not to mention almost every iOS rhythm game out there. Though Elite Beat Agents was met with underwhelming sales, it seems that several western developers were “inspired” by the game’s addictive rhythm gameplay (though not necessarily the personality), as can be seen in DS games like Looney Tunes: Cartoon Conductor and Michael Jackson: The Experience. Of course there’s also the freeware PC game, Osu!, with its countless user-generated patterns of varying quality made with the purpose of bringing the Ouendan experience to the PC – albeit in an unofficial state. 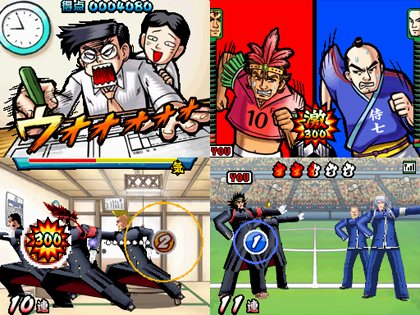 iNiS are still making games, but they’ve yet to release anything that matches the innovation and uplifting nature of their DS titles. Titles like The Black Eyed Peas Experience (yes, that was iNiS) might be a more commercially viable interpretation of their usual music-focused style, but they lack the bizarre storylines and general craziness. Most recently iNiS produced the iOS title, Demon’s Score, but despite playing a lot like Ouendan and featuring music from some of Square-Enix’s best composers like Yoko Shinomura and Hidenori Iwasaki, the sexed-up protagonist and misguided attempts at “edginess” make it feel more irritating than entertaining. So while plenty of games have tried to emulate the look and feel of the Ouendan games, the spirit and passion behind the original titles just isn’t there any more. There really isn’t anything quite like them.

Import Friendliness: Pretty high. If you’ve played Elite Beat Agents then you’ve already figured out the gameplay and menu options. The dialogue in the story sequences moves a bit too quickly to follow, but it’s largely inconsequential and the art is expressive enough to get the point across, anyway. The next Famicomendium column might be a bit late since I’ll be up in northern Queensland for a week trying not to be disemboweled by cassowaries, but when it returns expect a look at an ancient adventure game that’s all about Halley’s Comet, space monsters and… Jesus? Don’t miss it!

Want to spoil yourself on the contents of upcoming articles?